Wondering what kind of recipes you are going to make for Super Bowl? Are you sick of making the same ones every year? How about a fancy appetizer that will have your friends asking for the recipe? So many questions, I know, but if you do not know it yet, people come to Superbowl parties particularly for the wonderful spread.

As part of the Foodbuzz Tastemaker Program, I received 2 bottles of Pace Picante Sauce in the mail in order to create my own delicious recipe for a Superbowl party. I was so excited to get them today I changed my mind about what I was making for dinner and focused on making something using the sauce.

Have you had bean dips where you dig your chip into a small portion of bean dip and the chip breaks off and you need to dig in again? So frustrating and then you have to lick your fingers and all that jazz. Well, licking the fingers is not at all the problem. I have been to restaurants where they offer nachos and your plate arrives with 12 chips layers perfectly with the beans, cheese, meat and jalapeno and you totally feel ripped off. My recipe gives the cook the convenience of making mini phyllo cups to 1/2 cup muffin pans to assemble this recipe. Between preparing and baking, the total amount of time to make these babies is only under an hour.

Now I know I have vegan and non-vegan readers as well as a non-vegan at home, so I decided to give two options for this recipe which are equally as delicious, as so my husband pointed out. The phyllo cup is layered with refried beans mixed with diced red and yellow peppers.

The next layer is a combination of cream cheese and Pace picante sauce with spices. I used Tofutti cream cheese which is non-dairy and really does not taste so much different than real cream cheese. My husband can’t tell the difference. The third layer is only for the NON-vegan.

I cooked some flavorful diced chicken and added as third layer and topped with cheese and popped in the oven. For the vegan, I left the cups at the second layer and baked. When they were baked I then just added fresh layers of guacamole and some Pace Picante sauce. YUM! Once you bake the phyllo cups they come out so nice and crunchy, it is like having your own personal chips and layered bean dip without the hassle! 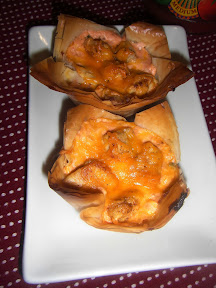 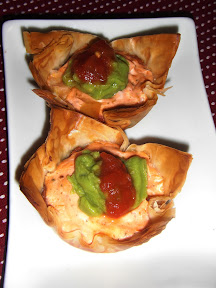