Did everyone enjoy the MLK holiday? I took it off to spend some time with Ryan since he was given a day off at school. We perused the outlet mall in Howell, MI and replenished some missing or broken kitchen gadgets we have not had for some time. I also found some neat gadgets, like a mini dumpling/empanada filler. I needed that back when I made the mini empanadas.

After 2 hours of looking and walking we finally realized we were starving! We headed out to Ann Arbor and decided to eat at my favorite vegetarian / vegan restaurant, Seva. As everyone has already seen from my last restaurant review, I did not have a great experience. How did I make this up? Ryan took me to the well-known restaurant in Ann Arbor. What a sweetie, is he not? I think so! Even though I know there are not many choices for my husband, he makes do, knowing that I will enjoy tasting a different vegan dish. I had a nice Portabella Mushroom Burger with Soy cheese and grilled onions and some Idaho Fries. Ryan ordered the Bean Burrito in a Wheat Tortilla with fresh salsa and melted cheddar cheese on top. After we finished eating we felt like napping seeing that it was a gray, damp and cold day. We shrugged it off and visited some used book stores and music stores.

After we were done, we realized that our day had gone by since we made a late start, but lately it has felt like the days are going by SUPER fast. Don’t you feel it? Either way, we decided we needed to make one more stop before we headed home, since Ryan had to catch up with work and all. Last month, I won a $100 Whole Foods giftcard from Keep Your Diet Real after she hosted a 40 day breakfast challenge. It sure was an encouragement since I now officially eat a healthy breakfast. Anyway, since the closest Whole Foods was an hour IN Ann Arbor, we decided to make a stop and see if i could stock up on goodies. Funny that someone said that I would not be able to get much with $100 there, but I beg to differ. Thanks again Corrine for such a great giveaway!

After a long day of relaxing (wink), I felt inspired to cook a nice meal. Lately I have been cooking a lot of stir frys and noodle dishes using coconut oil. A while back, Tropical Traditions provided me with a free sample of their product to review and even though I am under no obligation to review their product I decided to share how delicious their product works for all my dishes. 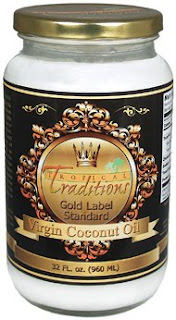 One of my Asian dishes last week came from the Skinny Bitch in the Kitch cookbook. If you have not heard of this cookbook, I know, it is a little bit of a shocker, but these gals have great vegan recipes that do not fail at all. Pad Thai is one of my weaknesses when it comes to Thai food, but the problem I face at restaurants is that it has fish sauce. This recipe substitutes delicious ingredients to make a satisfying alternative. I also used Brown Rice vermicelli for a healthier alternative but the flat rice noodles can be used.

Cook the noodles according to package directions. Drain and set aside.

Meanwhile, in a small bowl, whisk together the agave, mirin, ketchup, tamari, lime juice, and chili sauce; set aside.

Heat the oil in a 12-14 inch skillet over high. Add the tofu and stir-fry for 4 minutes

Add the garlic and vegetables and stir-fry for 5 minutes.

Add the noodles and the sauce mixture and stir-fry until the noodles are softened and evenly coated with sauce.

Add the green onions and cilantro and combine well.

Serve on plates and garnish with peanuts and lime wedges.

The next dish was also very delicious and FANTASTIC. Tropical Traditions Coconut Oil is VERY flavorful and even has a coconutty smell and flavor so it enhances your dish. The Peanut Satay Sauce contained coconut milk so using the coconut oil enhanced the flavor in each bite. I picked up a fabulous bottle of Peanut Satay sauce from Whole Foods yesterday because:

This was my first time using Simply Asia Foods sauce for a quick dinner. I usually like making my own sauces but this proved to be a great substitute. The following recipe is my own creation using this fab sauce, but I made this with chicken since Ryan requested it. The seasoning for the chicken can be used for tofu. Ryan gave the flavor an enthusiastic 2 thumbs up! Remember, the key to these dishes is making sure you have plenty of veggies so that you will not feel guilty about the carbs. Enjoy!

Prepare the noodles according to package directions. Drain and set aside.

In a wok, heat coconut oil on medium-high heat.

In a small bowl, place chicken breast, ginger, garlic, salt and pepper and mix. Add to wok and cook for 10-15 minutes. If working with tofu, make sure the tofu gets crispy and golden before adding veggies.

Add vegetables and cook for 5-7 minutes, and then add rice noodles, Peanut sauce, and water. Mix thoroughly and cook for another 5 to 7 minutes or until noodles soften and sauce has been somewhat absorbed.

Add cilantro and toss in noodles. Serve on plates and enjoy.