I am suffering from a hangover and not the typical hangover you might be thinking of! Come on! I know what you were thinking of, how rude! No, I meant that today was my first evening off after such a busy and hectic week and weekend. We had a successful concert in Holland, Michigan which an attendance of around 360 people. I believe all the singers and soloists were very excited and happy when the concert was finished. The church turned out to be the perfect venue for a concert featuring opera arias, choruses, broadway showtunes. I believe we were all saddened that we could not have an extra night to perform all the music all over again. Six weeks to prepare music goes very quickly!

After this concert, we were able to return home and prepare to be in a graduate recital. Whew! A weekend filled with musical performances and rehearsals sure is taxing! When I woke up this morning, all I wanted to do was turn over and fall asleep again, but alas this was not going to be the case. I pulled myself out of bed and took a nice shower to wake up which then continued to snap me out of it. A nice bowl of steel cut oats with fruits was calling my name so I decided to munch on that in order to regain morning strength to work. It did work!

Since I had this so late in the morning, I skipped lunch. The afternoon proved to be a little bit better especially since the sun was out most of the day. I HAD to enjoy that since the forecast predicted 12 to 14 inches of snow in the upcoming days. It is hard to envision this since the snow has been melting.

You know what was NOT melting? The 3 bars of chocolate I recently received from a NibMor Chocolate. I learned that the two gals who created this delicious chocolate back in April 2009 had in mind to make available to the public a chocolate bar that was not only organic, but vegan, dairy and gluten-free, raw, low on the glycemic rate and with no refined sugars. Who can ask for anything more.

Ms. Love sent me one of each flavor to sample. Here is what I thought of each bar. 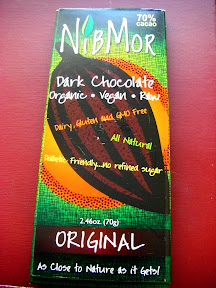 Original: This creamy dark chocolate contains 70% cacao and quickly melts in your mouth. The flavors balance each other with a bittersweet taste. I normally crave more than one piece of chocolate with normal milk chocolate but just after one square of this chocolate, the craving is satisfied. Thanks to natural ingredients: “Organic Cacao Butter, Organic Cacao Powder, Organic Agave Nectar, Raw Vanilla Powder, Organic Virgin Coconut Oil, Sea Salt, Non-GMO Soy Lecithin (an Emulsifier)” 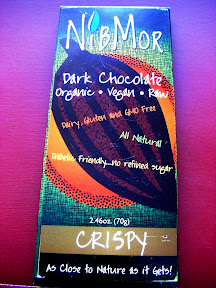 Crispy: I normally would go for pure chocolate, but this crispy chocolate contains puffed brown-rice that adds a delicious balance to the dark chocolate. This bar is better than the sugar-filled Nestle Crunch bar that is not natural. This proved to be its healthier version.

Almond: When I would go to Whole Foods, I would tend to migrate to the chocolate-covered almonds. That was before I went vegan. This chocolate bar has a delicious crunchy and almond flavor using raw almonds. The almonds do the trick and do not overpower this dark chocolate.

Dark Chocolate is healthier for you and even though the fat content of these chocolate bars is pretty high, remember that this is healthy fat that the body needs. Moderation is the key too. NibMors Chocolate Bars are so refreshing I definitely recommend them to all chocolate lovers out there.

Remember to purchase your bars just in time for Valentine’s Day!