We woke up early on Saturday morning and left right on time to start our drive to Toronto. Our Spring Break had arrived and our car was packed and ready for the 4.5 hour drive. We had a great drive until we reached the border and we got the 100 questions asked by border patrol but we survived and continued our drive across a great bridge into Canada.

We would have arrived on time at our bed & breakfast place but we hit a huge traffic jam that delayed us 30 minutes, so we arrived at 1:45pm. We drove up to our place and realized we could have possibly made a mistake with our choice. The area seemed fine but our B&B looked a bit run down. We gave it a chance and walked in and talked to the guy working there. He showed us the place and our room and Ryan and I looked at each other trying to read whether we should stay or not. We decided it was not that bad of a place since we were only going to sleep there and breakfast was of course included. (That is another story for the next post)

We unloaded our car and dropped our stuff on the 3rd floor, which was a remodeled room in the attic. I had a map in hand with plans for mid-afternoon trek in the city. We headed out to the St. Lawrence Market, known for its stands of fruit, veggie, fish, and meat vendors.

The place also had many eateries, which was perfect since we had not eaten anything but coffee and a granola bar int he morning. We got to the basement where there were many options for a light snack. Ryan opted for a spring roll and dumpling and I chose a beet / carrot / veggie drink with a potato dumpling.

It gave us the the energy for our grand walk. We walked all along Front Street from the market all the way through the Financial District until we got to the CN Tower. 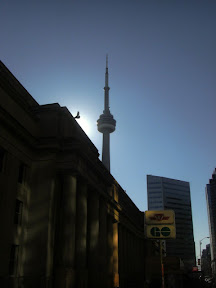 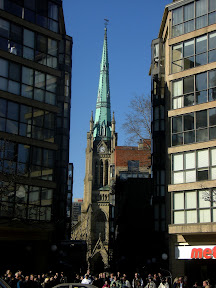 We decided that we did not need to go up the tower, but we like the view from below. At this time, Ryan wondered where the crowds were since it was Saturday after all and it was Toronto! We continued our trek from the CN Tower to Queen Street where we met a huge mob of young people. Stores lined the street from Lululemon to Gap. We both thought perhaps we found our 5th avenue? No, I do nto think so.

Our walk then continued to Spadina and Queens Street. I remembered from studying the map that the blogger meet-up was going to be nearby so I was glad to pin point the area. We followed Spadina into Chinatown, but before, Ryan found a place to try on fur coats. Did I tell you that my husband wants to buy me a fur coat?? Even though I told him I do not want one, I humored him and tried on several coats. He was in fur heaven!

We continued to Chinatown and we enjoyed looking through the shops and the people eating at different dumpling or Pho restaurants. By that time, we knew our walking excursion for the day had come to an end so we headed down Dundas Street all the way back to our B&B. On thw way, we saw several museums and a great view of the CN Tower.

When we arrived to our B&B, we rested for a bit and changed clothes since Ryan had found a choir for us to listen to for our night event. But, before that, we were so famished we decided to stop for dinner at a place called Mezzetta Mediterranean Restaurant where they specialized in tapas in mediterranean form. Food in small dishes for 2 people extremely hungry did not sound appetizing, but it proved to be satisfying despite the lack of flavor in some of the dishes. Ryan ordered the lamb chops that looked like they were for a 6 month year old baby and I ordered falafel, hummus, salad, and other choices that came in 1/2 cup portions. We enjoyed it despite the portions.

We then enjoyed a nice concert by a local group of women called Oriana Women’s group and Ryan got to chat a little with the conductor afterwards. Even though it was late, we decided we were not ready to get back to our B&B yet so we drove down to Little Italy and parked in a neighborhood and found a nice cafe. We both had americanos and Ryan had some carrot cake. Their coffee was so delicious, it transported me back to Italy from a few years back! I mean, all the staff was speaking Italian and they did not even have soy milk! Ha! So we enjoyed our lovely evening and plopped in our rooms for the night after a full day even though it was only 11 hours long!