I know the title does not combine but the fact is it is what we enjoyed the other night. Can I tell you that it is really HARD to cook for one person? My husband was gone for 3 days and I pretty much feasted on hummus and pita and snacks while he was away. You know what made it harder for me as well? Hearing his voice on the other end telling me he can’t wait to get home to see me and to enjoy my home cooking. What a compliment! It is not like this all the time, but somehow after returning from New Mexico and settling in after cooking a bit over there, I guess I did not FEEL like it. I was a poo-poo head, I know.


Now Ryan is back and I was back at making something super delicious! While in New Mexico, I made crab rangoons for a party my friends had. I really did not have too much time to make a vegan option even though I made 3 with a tofu combination. Well, yesterday I decided to try my hand at another variation I tested in my kitchen.


Match vegan chicken comes to the rescue! This stuff is so delicious it took on every spice and ingredient I added as a filling for the wontons. 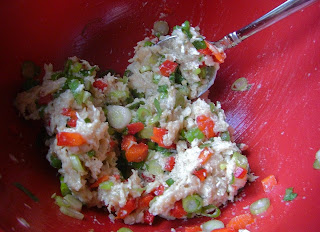 Kind of looks like crab or something cheesy,eh? I used a mixture of Match vegan chicken with green onions, red pepper, ground ginger, white pepper, soy sauce and garlic powder. I added a tablespoon of filling to each wonton and wrapped them up according to packaged instructions. So cute! 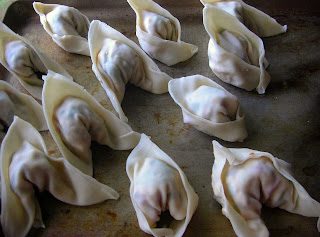 I then fried in coconut oil for 5 minutes: 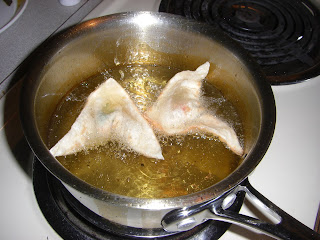 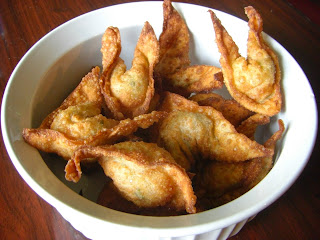 Yum! Ryan thought they were SUPER delicious and claimed he was VERY happy to be eating good food and not just camp food! 🙂 I like taking care of him can you tell? 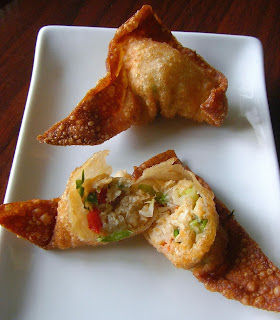 Now, the filling is perfectly flavorful without having a dipping sauce since we made a huge green salad on the side. A good sweet and sour sauce would be good and would be a great option, but these wontons were so moist and full of flavor that they did not need a sauce.


While I prepared the wontons and salad, Ryan prepared a drink he had come across called the San Juan. Sounds more Cuban than Asian, but we decided they would be nice. It was definitely VERY delicious and a different flavor.


Update: This recipe and picture made it on Foodgawker!


Mix vegan chicken with all the vegetables and spice and blend well. Let mixture sit for 5 to 10 minutes.


Heat 1 cu to 1 1/2 cups coconut oil on medium heat in a small pot. Sprinkle a little water over the oil to see if the oil is hot enough. It should make a sizzle sound.


Take each wrapper and lay on flat surface and add 1 Tbsp of filling to the middle of each wrapper. Moisten the edges with water and close one tip to its opposite end. Repeat witht he rest of the wrappers until all prepared.


Add 2 wontons at a time and cook for 3 to 5 minutes or until golden brown. Use a slotted spoon to dip out each wonton, placing on a paper towel to soak up excess oil. Repeat with rest of wontons.


Make salad before hand so wontons are fresh and hot. 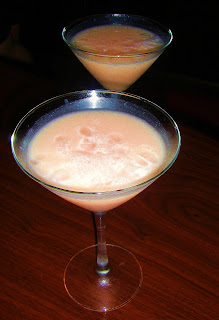 
from the New York Bartender’s Guide


Combine all ingredients, except brandy, with cracked ice in a blender. Blend until smooth and pour into chilled glass. Float brandy on top.