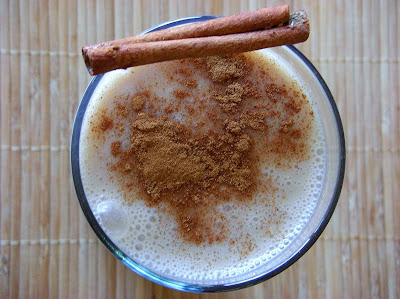 This post has been long due now. I received Viva Vegan from DaCapo publications a while back to review but I had only cracked it open while on vacation and marked several recipes. I finally started working on some of Terry Hope Romero’s recipes. I felt like I had something in common since I grew up in a Mexican / Chilean home so I was very excited how she had veganized some of my favorites. Over the next posts you will be seeing some samples of recipes I have tried. 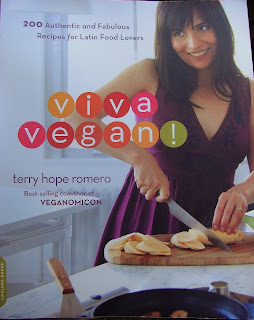 Yesterday I made a traditional drink called horchata that is not only enjoyed in Mexico but also in many parts of Latin America and in Spain . Horchata is usually a rice-based drink in Mexico and flavored with vanilla and cinnamon and usually mixed with milk. This is what I remember having when I visited my grandmother in Mexico. You could find it in corner restaurants serving horchata in gallon glass containers like this:

In the states it is very hard to get FRESH horchata since it is usually made from grinding rice and almonds and a longer process. It is usually found in Mexican grocery stores made from more artificial flavors and not like the normal fresh drinks.

When I visited Spain a few years back, I was able to taste their version of horchata which is made from chufa or tigernuts. I was able to bring back a bottle from Spain so that I could continue savoring the wonderful flavors.

I was SUPER excited when I saw it in the cookbook because I know knew I could make my own and enjoy it whenever I wanted. Since Ryan had never had the drink before I was looking forward to see how he liked it. Terry’s recipe had added ingredients that I knew would give this beverage a unique flavor.

Once you make this recipe, the beverage needs to be refrigerated so the flavors come together or you can add ice and blend the drink in a blender which is VERY good too. This is how I prepared it for Ryan. The recipe also has a leftover dessert to enjoy for a later time. Nothing goes to waste in this recipe. Once the rice, almonds, and spices are cooked in the milk and water, that is all drained in a sieve and the leftover rice mixture can also be refrigerated and enjoyed as rice pudding. SO delicious!

In a large pot, combine 2 cups of the almond milk, and the water, cinnamon sticks, agave, lime zest , cloves, rice, and ground almonds. Cover and bring to a boil, then lower to a simmer; stir and cover. Cook for 20 minutes, stir and turn off the heat. Remove the lime zest (I left it in) and let the mixture cool to room temperature before transferring to fridge. Chill for 2 hours or overnight.

I skipped the cooling and drained mixture through a sieve and added the additional 2 cups of rice or almond milk since I wanted to sample the drink.  (I used 1 cup and added 5 cubes of ice and sprinkled some cinnamon on top for immediate enjoyment)

I kept the rice and chilled overnight and enjoyed as a breakfast rice pudding. It can alos be eaten for dessert. 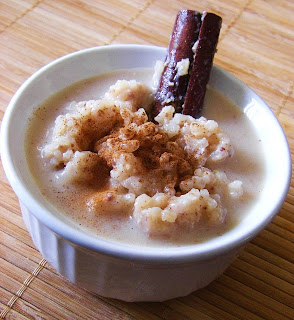