Thank you all for your lovely comments on my last post. We are terribly excited about bringing a new life into this world. All this means is that we have to make room in our snug duplex for a baby! We are so ahppy to already have our crib, we just need to make space in Ryan’s office to make it half a nursery.

I love challenges and I know I will be faced with many in the next 4 months. We are already booking our calendars for multiple visits from friends and family members. Is it not wonderful when an addition to the family brings everyone together?

I have been going through the predicted nesting period since we returned from Germany. Nothing seems to be clean enough or organized enough, but then some things DO need more organizing. I am making more lists than usual and trying to spread out evenly over my work days so that I do not feel so exhausted by the end of the day.

A little side note: For those who are new to the site, I have been singing and since the summer started I have not been singing as much. We have been traveling and working on other things, but the plan is to continue voice lessons throughout the summer so as to prepare for upcoming solos in the fall. Meanwhile, I forgot to share with you several recordings from this past spring.


I sang a new Verdi aria from La Forza del Destino called “Pace, pace mio dio.” It was an amazing aria for me to work on especially being pregnant. How would it affect my singing early in the 1st trimester? I think I had more saliva production and had recently gotten a cold so it was hard not to let those things get in the way.  Please feel free to listen:

While in Germany, we got to the Bavarian region and got to visit the magnificent Nieuwenstein Castle. While there we learned that most of Wagner’s operas inspired King Ludwig to depict his characters in many of his rooms. 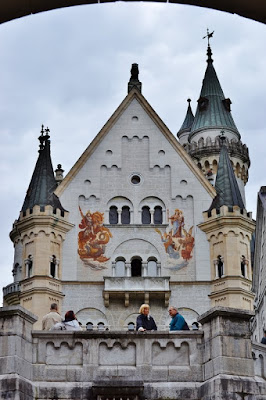 The concert hall was fabulous and as we were told it was amazing to think that Wagner was in the same room we were touring.  One of the gentleman in our tour group found out I sang opera and dared me to sing a few notes in the hall. I sang a few notes of Mozart’s “Ach, ich fühl’s.” It was pretty amazing to hear the voice carry in the room and I think I also surprised the tour group behind me too! 😀 Well, enough of my German adventures and on to a new adventure in the kitchen. Last night I was inspired to make a white pizza for the first time. As I looked up other recipes for white pizza I noticed a lot of them called for ricotta and mozzarella cheeses but the one that really caught my eye was one that required no cheese but still sounded delicious.

Midwest Vegan has been cooking up a delicious storm in her kitchen this week and somehow I have been inspired to make everything she is making. I do not know if it is more the fact that anything I plan makes me nauseous, but I guess imagining someone else’s dishes makes me less sick. Either way, my eye caught her post about the white pizza she made 2 nights ago inspired by another blogger at SB and GB Both of them look so scrumptious folks and it was so EASY to prepare and make. Neither recipe states how big of a pizza the dough makes but I know that I made mine fit in a 14 inch pan and it was the right thickness. What was not accurate was the amount of white sauce for the pizza. It only makes 1/2 cup sauce, but I would increase it to 2/3 cup and little more salt. Either way, it was a very tasty pizza with the crust being more of a foccacia consistency. I added mushrooms, sun-dried tomatoes, and chopped broccoli and an additional shake of parmesan. Add a big green salad and you have a perfect meal.  My favorite part was grilling the garlic heads and making the white sauce because it is thick and delicious without the dairy, and get this, it uses coconut milk! YUM!  Make it tonight or over the weekend folks! White Pizza with Mushrooms, Sun-dried Tomatoes and Broccoli
serves 2 to 3
Crust
1 1/2 teaspoons active yeast
2 Tablespoons sugar
1 teaspoon ground coriander
1 cup warm water
2 cups unbleached all-purpose flour
1 teaspoon salt
2 Tablespoons olive oil
Coconut White Sauce
2 heads garlic
2/3 cup So Delicious Original coconut milk
1/3 teaspoon salt
Toppings
1/2 c sun dried tomatoes
1 1/4 cup broccoli heads, chopped
1/2 cup mushrooms, sliced
vegan parmesan (or regular) for sprinkling
For crust
Mix together the dry active yeast, sugar and ground coriander in a large bowl.  Add 1 cup of warm water to the bowl.  Set aside for a few minutes until it foams. Toss in the salt and 2 Tablespoons of olive oil, and slowly sift in about 2 cups flour until it sticks together into a loose dough.
Lightly flour a cutting board and turn the dough out onto it.  Knead it for about a minute, then set the ball in a large bowl greased with 2 Tablespoons of olive oil.  Turn the dough over to cover in oil,
then let sit in a warm place until it doubles in size, about 45 minutes.
Meanwhile roast the heads of garlic. chop the tops off to make them easier to extract later. lay them in aluminum foil and cover with a little olive oil.  Roast at 375F for about 30-45 minutes until light golden brown.
When they are cool enough to handle you can pop the cloves out with your fingers. blend them with the coconut milk and salt, and set aside.
Once the dough has risen, preheat the oven to 475F.  Sprinkle a large baking pan with cornmeal or flour.  Gently remove the dough from the bowl onto the pan – it will deflate a little. lightly flour the dough again if needed and press out to a large oval, slightly thicker around the edges.
Lightly pour the cream across the crust, then add the mushrooms, tomatoes and broccoli, pressing down gently.
Bake at 475F for 10 minutes or until lightly brown around the edges and the cream is starting to bubble. Sprinkle with parmesan!