I hope every one of you mothers out there had a terrific day! I was so sad I did not get to spend it with my mother but I was able to send off my sister, who lives near her, to take my mom out for a nice dinner.
It has been a beautiful blessing knowing that God has given me the gift of being a mother to our little girl. The picture posted above was taken in New York last February after I announced that I was pregnant. I had a food blogger meet-up and a friend gifted me with this little tee, which Julianne will be wearing soon! 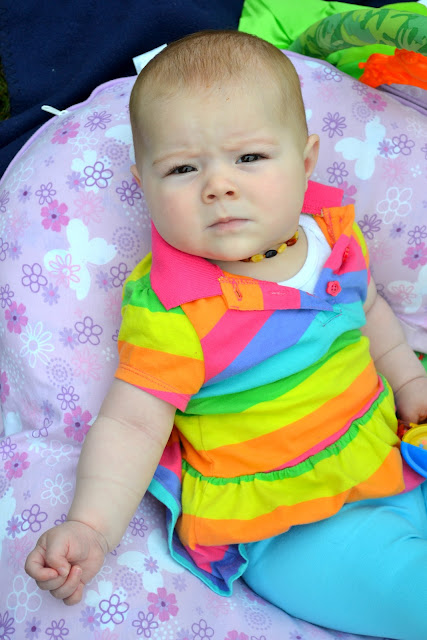 Fast forward 6 1/2 months and here is my big girl! She is rolling around, sitting up and eating food already (more on that later)! She is such a character and has such a personality already. She is so much fun and both my husband I agree this has been an easier stage than when we first began as new parents.
No one really lays it out for you, that motherhood is going to be hard. Well, maybe not hard, but challenging. No it is hard because it is something different, but somehow God has wired us to be strong and wise to bring up our children.
How did my Mother’s Day begin? Julianne woke up at 6:30am (ugh) and Ryan promptly took her out of the bedroom and let me sleep for more than an hour before we got ready for church. It was SO nice to sleep in. Ryan did get a nap later for being such a great daddy!
Coffee was brewing and a nice bouquet of flowers and cards were awaiting. It was beautiful!
We celebrated early, the evening before because we knew places would be crowded so I got to choose the place: Sultan’s Middle-Eastern Restaurant. This is probably one of my favorite restaurants in the Lansing area because the food is fresh and authentic. I started with a raw juice called Raw Potassium, which was made with juiced carrots, celery, spinach, and parsley. SO delicious and good. Ryan even took a swig of it and realized it really did not have much of his least favorite veggie: celery. 🙂
For an appetizer, we had some delicious lamb sliders (not pictured). Our second appetizer were plates piled with fresh tabbouleh and a basket of mini pita breads. Can I eat this every day? I would just be plain content.
What did we have for dinner? We waited too long for our entree but it finally came and I did not have time and forgot to take a picture of our Sultan’s Combo which came with Chicken Kebab, Lamb Kofta, Kibbee, Falafel, rice and veggies. It was so much food but we were glad to have leftovers for today. So good!
The highlight of the evening was Julianne, of course! She got to sit a high chair for the first time and she ate dinner with us. I brought some mashed avocado and a sweet potato / butternut squash combo for her to eat while we ate. It was fun! She was so calm and was very eager for every bite. See that table behind the picture behind Julianne? They came up to us afterwards and beamed at how great she was during our whole dinner. WHEW. I was really trying not to be nervous that she would throw a fit but she was an angel. She followed people around with her gaze and waitresses came by making her smile. This truly made my Mother’s Day for sure!
I thank God for the opportunity and blessing of being a mother and I thank my mother for being such a hard working and God-fearing mother. I believe it truly has made me the person I am and to be a persevering person. Thank you Mom and God!


If you get a chance visit my friend’s post On Becoming A Mother. It is so poignant and it is powerful. Thank you for your beautiful writing and words Larissa!~
What was something special that was done for you or that you did for your mother?