Since Ryan had some classes to teach on Friday we were not able to leave until after 11 am but I was fine with that because I could get Julianne to nap. She napped more than an hour but then I had to get her up which was sad because she was still very much asleep. How cute! As soon as I got her ready we headed to the station and met up with Ryan and parked our cars. We were ready for our first train to NYC! We had wonderful weather and we tried to take as few things with us including one diaper bag in a backpack. I did not carry Julianne in the Ergo the whole trip because well it is somewhat difficult carrying her and myself and the baby! It was exciting side carrying her for the first time. Julianne really enjoyed the train ride. It was very challenging keeping a toddler occupied and distracted. She loved standing on our legs and reaching out for the train tickets and saying hello to strangers. She got a bit hot so we took off her fleece pants to cool off. Daddy tried to do some work meanwhile. Ha! 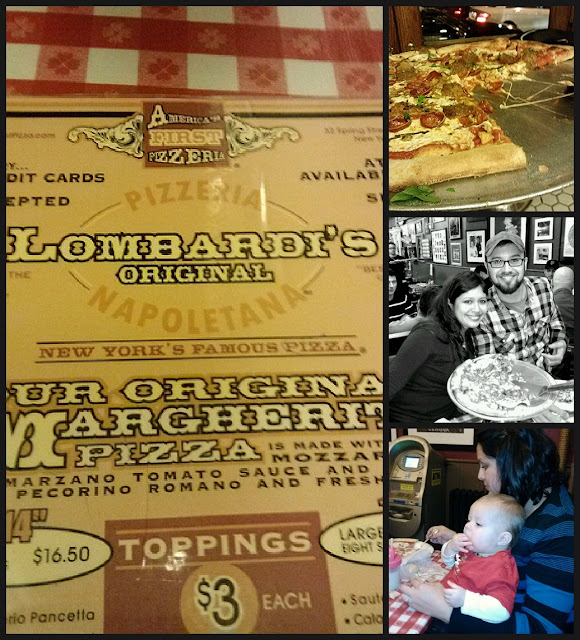 When we finally arrived we took the subway to our hotel and then headed out to dinner. We were famished! Since Ryan and I had been to NYC back in 2011 we knew there were several places we wanted to go back to. Lombardi’s was the place we chose to share with our family. It was delicious! Even Julianne had her first crust with marinara and chowed down, loving each morsel! After dinner, we decided to split off for the evening. We knew we had to take Julianne back to bed and some clean up time so we let my sister and BIL head out to Times Square and Serendipity 3. (Jelaous!) We stopped right across the street into Rice to Riches, the place shown in the movie Hitch. I totally did not know it was a dessert place but when Ryan found out it was a rice pudding place I knew he would need to have something. We decided to split a dark chocolate pudding and a tiramisu flavored rice pudding. SO delicious!

We took the subway back to the hotel and got off one stop before our hotel so we could show Julianne Grand Central Station. She loved it, especially the constellations on the ceiling. When we got to the hotel, Julianne was SO excited to roam around and jump on the soft pillows on the bed. The hotel provided a crib that she enjoyed sleeping in but it was not so exciting when she woke up at 3:30am. It is hard to have 4 people sleep in one room plus a baby but it was doable.

What happened the next day? Stay tuned tomorrow!

All these pictures were taken with the LG Intuition, a sample phone from Verizon. Disclosure: I’m a part of the Verizon Savvy Gourmet program and have been provided a wireless device to use and review. I have not been compensated for a positive review; the opinions shared are all my own.