This is a sponsored post by VisitPhilly.com. We were provided with entrances to all the tourist attractions. All opinions are my own. 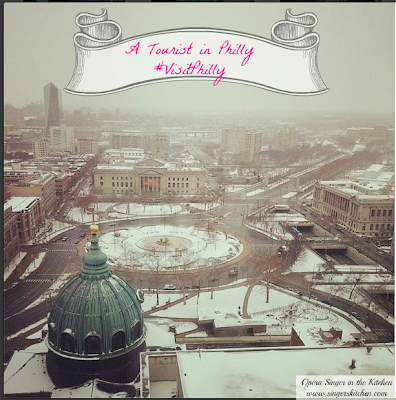 Back in February, Ryan and I had a chance to get out for 36 hours since my mother was in town. She had lots of time to spend with the girls while we had time to catch up as a couple. Initially when we started talking about going somewhere we looked at going to Baltimore or DC but then we both decided we needed to get to know our city. It has almost been 2 years since we have moved to Philly and while it has been exciting to be closer to a big city, we have hardly been able to visit it as a couple.

We decided to map a few places to eat throughout our trip that we had seen from Guy Fieri’s Diners, Drive-Ins, and Dives show on Food Network, since we are foodies. We simply had to. We took the train into the city and within 45 minutes we were in the city ready to take on the sites, but first we checked out Honey’s Sit ‘N Eat. It was delicious hole in the wall restaurant with delicious food. We shared a matzo ball soup, ordered a famous latke, ate fish tacos and drank La Colombe coffee. We truly had a great brunch but now we were ready for touring.

We decided to try the Philadelphia Sightseeing Trolley, especially since it was still very cold, but then we had the ease of hopping on and off in order to check out the attractions on the sightseeing track. It was perfect! The shuttle service picked us up from our restaurant location and took us to the trolley stop. Our first stop was the Eastern State Penitentiary which is something both of us had been wanting to visit. It is gorgeous from the outside and really sticks out in Fairmount Avenue, a gorgeous street. I love how eerie it felt as we walked in especially since it was REALLY cold. We were very glad to have our coats because our self-guided tour was mostly outdoors even though there were no windows it was pretty much an open jail. It was fascinating learning the history behind the place and we were satisfied with our experience. It is a definite must-see attraction but I imagine the place being better to see during the summer. Check out their tours.


Since we had arrived in the city a little later than we planned we were only able to work in one attraction but we were happy. We were still able to pick up the trolley from the prison and continue the tour from the trolley with the guide describing the rest of the following attractions:

We finished by walking to the Macy’s to see the Wanamaker Pipe Organ which has the largest playable organ. I wish someday Ryan could play on that organ because it would be awesome.

Since we had a later lunch we held off on dinner until a little later and walked around Locust street and saw some sights at night. It was St. Patrick’s Day, so the festivities were definitely in full swing. We wondered if we would get a seat anywhere but since it was still a Monday night we had luck. We originally were going to try another Guy Fieri recommendation but we thought Jamaican food was not so Irish. We settled on Fergie’s Pub on Samsom street which turned out to be surprisingly good. I have not been too disappointed with Yelp reviews, so we’re glad it was pretty accurate on its ratings. We were lucky enough to catch a bag pipe playing throughout the restaurant but left after briefly after open mic started.

We definitely enjoyed the location of our hotel. We were blessed to have enough points on our American Express to book our a room at the Sheraton Hotel overlooking Logan Square in Center City. It was beautiful in the daytime and especially at night before we went to bed. What a treat indeed. Since we were Starwood Platinum members we were able to have breakfast at the hotel and leave our belongings until 4pm. We are always looking for the best deal and one of those can sometimes be in accruing points.

The next morning it was a little warmer and we decided to walk to our first destination from our trolley tour. It was a few blocks away from our hotel and we enjoyed the morning exercise. Chinatown is one of my favorite places to go in ANY city. I had not been to it in Philly despite visiting the city years ago.

We explored stores, checked out some food stores, picked up some treats and even had one of my favorites: bubble tea! If you have never tried one of the popular drinks originating from Taiwan, then you are missing out. They are so creative in their drink creations and even though you might not be a tapioca (bubbles)fan there are always other options to be ordered. You can always tag me @singerinkitchen to ask for different options too!

We continued walking until we found Reading Terminal Market. Even though we had been there once, we did not have a chance to see everything since we were with our kids. We managed to eat lunch there before, but this time we only purchased a few food gifts and ran into a friend from church and took it easy. It was also nice just to sit and watch people rushing to get their lunch. This is a definite must when deciding where to visit when in the city. It is a lovely experience.

We decided since the sun had decided to make its appearance that we would skip the trolley until the end of our trip and continued walking in order to see more of the area. We headed to Rittenhouse Square and enjoyed window shopping and checking out local businesses. We loved running into occasional murals that were gorgeous! We found out that the same trolley company has a specialty tour called the Mural Arts Tour. I am definitely planning on going back for that because I was just simply amazed with the few we saw. I want to know all the history and dates when they were started and completed too.

We were glad to take a rest after being on our feet most of the morning. We got off on a stop closest to our hotel and picked up our stuff. We made sure to make one last stop at one of my favorite coffee places: La Colombe. I really can’t get enough of their coffee. We found our train and returned to our life in the suburbs and thanked God (and Visit Philly) for allowing us to be able to visit such a beautiful city. There is definitely a lot more left to see and we cannot wait to get back to see the rest in different trips. We were glad to have Visit Philly as a guide to all our attractions too.