This is another quick meal for the week without getting artificial on ya! It has so many fresh ingredients and they are right from your kitchen. I decided to cook another favorite dish of mine. We usually had this once or twice a month when we went to my grandmother’s house. I just realized that the last few dishes start with a C. You pronounce this dish as Char-KEE-khan.

The only thing I was not TOO thrilled about was that the photo I thought does not make the dish seem delectable, BUT let me assure you, it IS! If you are looking for a dish where you can hide veggies, this is the one! The charquicán is Chile’s version of the pot pie in a sense. It would take peas, if my husband like them, but I left that out. Wikipedia explains the origins as my grandmother would have explained them:

Charquican is a Chilean dish. It is a stew made form cooking chunks of potato and squashs. It may contain different kinds of vegetables as carrots, corn, green beans, tomato, etc. In its origen, it was made with horse dried meat (charqui), but actually, it may be prepared with any kind of meat. On top may go a mid-fried egg.

A variation of the charquican contains the marine common Chilean algae cochayuyo (Durvillaea antarctica), that is cooked in the same stew.

This is not how my grandmother made it, so DO NOT fret. Mine is savory and simple at the same time, without using the horse meat, yikes!

By the way, before you leave my site, please read the Contest and info below! 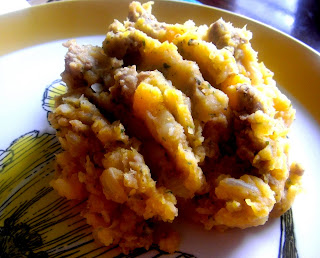 After cutting up the sqaush and potatoes, place in a pot and cover with water. Salt the water and boil for 10 minutes until veggies are softened.

Meanwhile, sauté the onions and garlic with the olive oil and add the meat. Then add the spices to the meat after it has cooked for 5 minutes. Continue to cook the meat mixture for 15 minutes and cover. Leaving the pan covered allows the meat not to dry.

Drain the vegetables and mash the potatoes and squash like mashed potatoes. Add the meat mixture and stir. 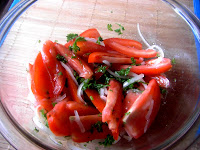 Slice the tomatoes and place in a bowl. After cutting the onions, place in a colander and add salt. Wash the onions under cold water in order for the onions not to be so strong. It is a cold sauté, in order to subdue the strong white onion flavor. Add the onions and parsley to the tomatoes. Lastly, add the vinagrette and serve with the chariquicán. 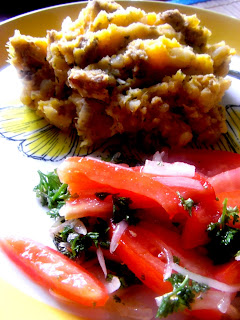 September is Ovarian Cancer Awareness Month, and for the second year in a row, Sara of Ms Adventures in Italy and Michelle of Bleeding Espresso are hosting the O Foods Contest to raise awareness of this important health issue.

There are TWO WAYS to take part in the O Foods Contest:

•1st: Signed copy of Dolce Italiano: Desserts from the Babbo Kitchen by Gina DePalma, Executive Pastry Chef of Babbo Ristorante in NYC, who is currently battling ovarian cancer, inspired this event, and will be choosing her favorite recipe for this prize;
•2nd: Signed copy of Molto Italiano: 327 Simple Italian Recipes to Cook at Home by Mario Batali (winner chosen by Sara);
•3rd: Signed copy of Vino Italiano: The Regional Italian Wines of Italy by Joseph Bastianich (winner chosen by Michelle).
OR
TWO: If you’re not into the recipe thing, simply post this entire text box in a post on your blog to help spread the word and send your post url to ofoods[at]gmail[dot]com by 11:59 pm (Italy time) on Monday, September 28, 2009.

•One winner chosen at random will receive a Teal Toes tote bag filled with ovarian cancer awareness goodies that you can spread around amongst your friends and family.
———

From the Ovarian Cancer Research Fund:

•Ovarian cancer is the leading cause of death from gynecologic cancers in the United States and is the fifth leading cause of cancer death among U.S. women; a woman’s lifetime risk of ovarian cancer is 1 in 67.
•The symptoms of ovarian cancer are often vague and subtle, making it difficult to diagnose, but include bloating, pelvic and/or abdominal pain, difficulty eating or feeling full quickly; and urinary symptoms (urgency or frequency).
•There is no effective screening test for ovarian cancer but there are tests which can detect ovarian cancer when patients are at high risk or have early symptoms.
•In spite of this, patients are usually diagnosed in advanced stages and only 45% survive longer than five years. Only 19% of cases are caught before the cancer has spread beyond the ovary to the pelvic region.
•When ovarian cancer is detected and treated early on, the five-year survival rate is greater than 92%.
And remember, you can also always donate to the Ovarian Cancer Research Fund at our page through FirstGiving!

Please help spread the word about ovarian cancer.
Together we can make enough noise to kill this silent killer.