So I woke up not feeling oh so well the other day and thought I would have to stay in. I came back from church and took a nap and somehow my stomach felt a little settled. During the afternoon, my stomach was still upset so, while I was doing my grocery shopping I purchased a fizzy drink I had forgotten about. If you like ginger ale, you just have NOT had the right one. I tried this most delicious brand by REED’s called REED’s Ginger Brew. I actually grabbed the one called EXTRA ginger brew. WOW! My stomach felt soooo happy after that. I am telling you, you gotta get!

Despite this fact, I finally felt well enough something light for the day. My hubby and I have been wanting pancakes for a while and after watching a some ULTIMATE challenge on Food Network, we felt we needed to try our at Ricotta Pancakes. Giada De Laurentiis has been a favorite of mine when it comes to trying new recipes, so I decided to go with her recipe instead of Bobby Flay’s. The only thing I added to the recipe was with the syrup. I had extra bluberries I wanted to use, so I added the bluberries to the boiled honey and sugar syrup for an extra blueberryyyyy taste! Enjoy!

Stir 1/3 cup of water and sugar in a small saucepan over medium heat until the sugar dissolves, about 5 minutes. Stir in the honey until it dissolves. Add 1/2 cup blueberries to the pan and boil for 5 minutes, until the mixture has turned blue-purple. Set aside and keep the honey syrup warm.

Using a rubber spatula, stir the remaining 1 2/3 cups of water and vanilla in a large bowl. Add the pancake mix and stir just until moistened but still lumpy. Stir in the ricotta into the pancake mixture, then stir gently to incorporate the ricotta but maintain a lumpy batter. Fold in the blueberries.

Heat a griddle over medium heat. Brush with the melted butter. Working in batches, spoon 1/4 cup of batter onto the griddle for each pancake. Cook until golden brown, about 3 minutes per side. Serve with the honey syrup. 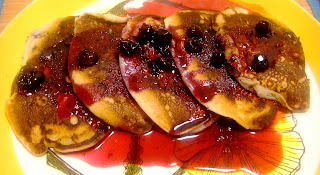