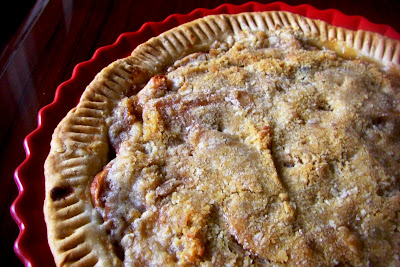 Seeing that this week has flown by, decided that I needed to end the week with some goodies. We had another couple over for dessert after my hubby played the piano for a hymn sing at a retirement community, so I knew that I had to make something seasonal. I decided that since I had so many apples left at home that I would make an apple dessert. I was inspired by another friend’s recipe we had while at donner last week, so it convinced me to make one too. I have never made one mainly because I have always thought it to be a very sweet dessert. My hubby and I have many definitions of what one would call VERY sweet and NOT so sweet. I do not think either one of us will ever win this debate.

While I thought that this recipe was a great one, especially the pie crust, I thought that it was terribly sweet. My hubby thought it was not sweet enough. I was very pleased with how the pie came out, it is just not going to be one of my favorites, unless I make it my own somehow. This is for later taste testings! Our company liked it, so that was the most important thing for me! Two thumbs up! 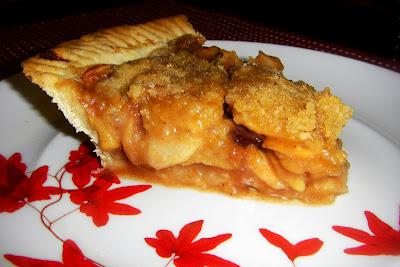 In a medium bowl stir together flour and salt. Using a pastry blender, cut in the shortening until pieces are pea size.

On a lightly floured surface, use your hands to slightly flatten pastry. Roll pastry from center to edges into a circle about 12 inches in diameter.

Wrap pastry circle around the rolling pin. Unroll into a 9-inch pie plate. Ease into pie plate without stretching it. Trim pastry to 1/2 inch beyond edge of pie plate. Crimp edge as desired.

Preheat oven to 375F. Prepare and roll out pie crust on pie plate.

If desired, sprinkle apples with lemon juice. In a large bowl stir together sugar, flour, cinnamon, and nutmeg. Add apple slices and, if desired, berries. Gently toss until coated.