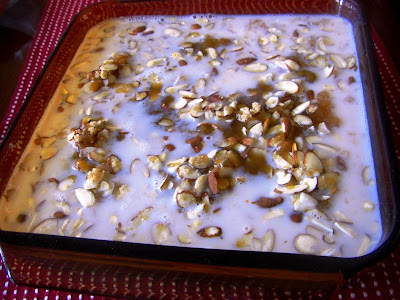 We have lately been having hearty breakfasts in the morning in order to build up our immune systems. In the mornings I usually wake up in the morning and prepare my hubby’s lunch, but knowing that we both like oatmeal and do not usually have the time to prepare it, I decided that after stumbling across a recipe on Foodbuzz, that it was an excuse not to be able to have a delicious and healthy breakfast.

Instead of baking an oatmeal with water, this recipe calls for the oatmeal to be baked in almond milk. I have made it 3 times and every time I made this recipe I used 3 different milks. I used the following milks: 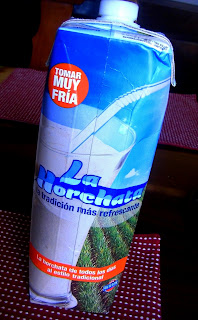 Chufa milk, otherwise known as Horchata de Chufa or Tiget Nut Milk, is one of my favorite nut milks. Ever since I tasted this drink in Spain, I knew I would have to get my hands on it soon. My sister brought me some from Spain a while back and I quickly put it to good use. The oatmeal came out creamy and nutty and OH so delicious!
I decided to make the second batch with coconut milk made by Turtle Mountain , which is a great dairy free beverage that I also had on hand. The recipe required a little more sugar than required, but otherwise it was delicious but not so creamy as the first batch.
Almond milk finally was used as the third choice, as the original recipe stated. The third batch came out creamy and delicious. It is great knowing that a nutty breakfast beverage other than milk can make such a warm and nourishing recipe complete! Of course, almond milk is always accesible as opposed to the number one choice that can only be purchased in Spain!. 🙂 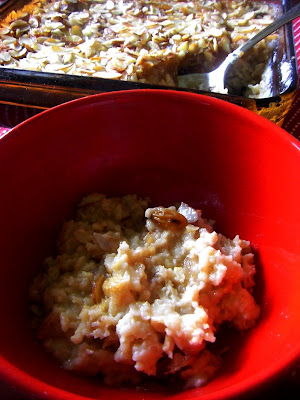 adapted from Inn the Kitchen

Start by pre-heating your oven to 350 degrees. Peel and core 8 Gala apples and semi-cover with water. Add 2 tsp cinnamon and 1 tsp nutmeg. Boil for 20 minutes.

Mix the almond extract with your milk. Then sprinkle the oatmeal in a greased glass casserole dish and pour the milk on top. Next, layer the remaining ingredients on top of the oatmeal.

Next, CAREFULLY add the casserole to the oven. It will be a little liquidy until the oatmeal soaks up the milk. Bake at 350 degrees for 40 minutes.