Sigh…both my hubby and I managed to get sore throats these past two days and it has been very crummy. I HAD contemplated taking a respirator with me on my plane trip down south but I thought I would look silly so I decided not to. Sure enough, I woke up the day after with an annoying sore throat. This is probably the first time both my hubby and I have been sick together, but we decided we were going to fight back. I mean we both still needed to work, so we have been laying it on thick with hot herbal, medicinal teas, soups and lozenges. I have been off meat for 2 days so I had asked my hubby buy me some vegetarian noodle soup but the stuff at the store still has a meat base, so I decided to make my own veggie soup.

I recently joined Twitter and I won a book from Eccorazzi, which is a “news and gossip on celebrities and notables in support of the environment and humanitarian causes.” The book I won was Alicia Silverstone’s new book called The Kind Diet, where “Alicia reveals how eating a plant-based diet will give you tons of energy, mental clarity, gorgeous skin and a renewed zest for life. Plus, it’s one of the greenest things you can do. Because it requires less fuel, water, and other resources, following a plant-based diet is a major contribution toward improving the health of our planet.” 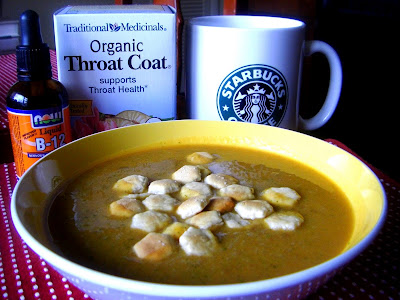 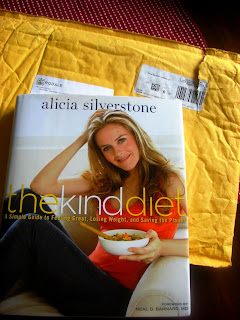 It is a huge step but I thought I would give it a try, while I continue to make meat for the carnivore in the family. It was just kind of crummy that while venturing on this new time that I had to get sick! Oh well. I guess it inspired me to make a yummy soup that took 20 minutes to prepare.

Place sweet potatoes in a small pot and cover with water. Add the garlic cloves and boil for 10 minutes or until soft. Add the broccoli and continue to boil for 5 minutes. Add the parsley and soy sauce. Place all items in a blender and puree. Serve while hot and top with crackers.