I left it up to Ryan to plan our anniversary trip and I had been waiting a while to find out where exactly we were heading. I was told that I would not find out until we got in the car. Ryan hands me a sheet a paper with Day 1 itinerary. How exciting. I never realized how much fun it is NOT knowing where you are going. The element of surprise has not been in my life of travel. I usually immerse myself in a city and pack my schedule but not planning a trip was actually very relaxing.


When I saw the schedule, I was excited to know we were going to Cleveland, Ohio. I had never been and it had been a while for Ryan. We started early so that at least we could arrive by lunch time. 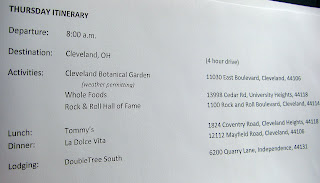 We arrived in smoggy Cleveland and had lunch at Tommy’s. I wondered what tyoe of restaurant my Ryan had chosen. I looked at the wall and saw this plaque: 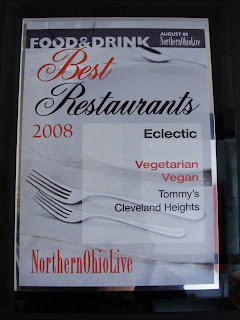 Wow! A restaurant that served vegan fare! How thoughtful of my husband and how nice of a friend to recommend it to Ryan! Tommy’s had a HUGE menu with tons of options. Since I could not make up my mind I asked the waitress what vegan dish would she recommend. She told me that the Delaney sandwhich was the one to try.
The Delaney consisted of fried tempeh, sauerkraut, spinach, pickles on rye bread. It was SO delicious. Ryan did not care for his non-vegan choice so I insisted he have a quarterof my sandwhich. He tried it and really liked it! He totally would have ordered that one if he had not ordered the tuna melt with hummus. I can’t explain that one. But first, we had an appetizer consisting of 2 falafel, hummus, baba ganoush, tahini sauce and a spinach pie. The hummus and baba had way too much tahini in it. It was not our favorite. 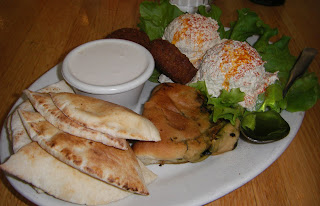 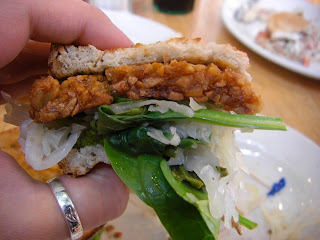 If you get a chance to visit this place, do it! We then headed to the Rock and Roll Hall of Fame for a quick tour around the building. Fun place and crazy how music has evolved in such a wild way. 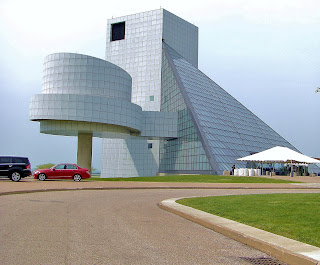 Ryan took a picture of me and the skyline. 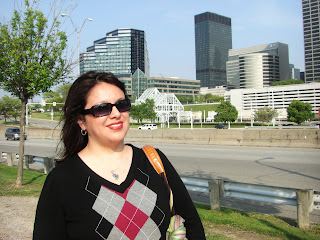 After a quick and busy afternoon, we rested at our hotel and got ready for dinner. Dinner happened to be in Cleveland’s Little Italy. It was so nice. I thought that Cleveland Heights was the best areas, BESIDES the Whole Foods Area. 🙂 La Dolce Vita was a nice Italian restaurant that made everything fresh from their sauce to their pasta. 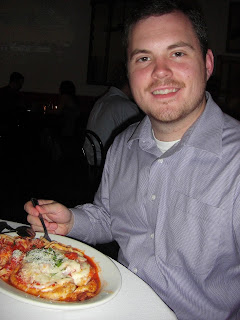 Ryan had their Chicken Parmesan, which he did not terribly care for, but it was chicken, and I had eggplant and their fresh pasta and marinara. The sauce was fresh, but the dish did not come with enough eggplant. It was tasty though. 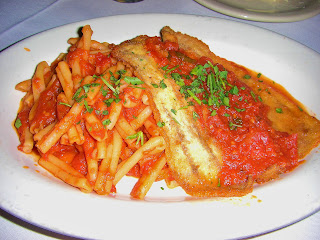 Next day: Mentor and Canton, Ohio