I have been in the mood for granola lately. I know it is thought to be an easy way to ingest calories and fat but when one has the luxury of making it at home, then you are able to see what all can go in the recipe.

Ryan had been enjoying the granola bars I had purchasged from Angela at Oh She Glows while we were in Toronto in March. Then I received a nice box of granola bars from Bora Bora Organic Foods back in February. Can you believe that we JUST finished them? Ryan actually liked them and was very specific to the ones he enjoyed. Here are the flavors I received: 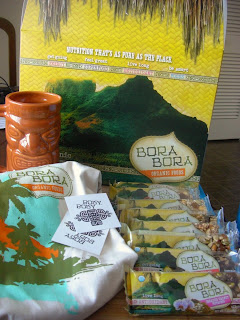 Their bars are gluten-free and are all certified organic. I would say they are all vegan but only 2 of the flavors are not vegan. Exotic Coconut Almond and Paradise Walnut Pistachio. While these two bars are certified organic, they’re sweetened with organic honey, instead of vegan agave nectar.


If you are one that does not have time to bake THAT often, these granola bars are very tasty. I saw them at Whole Foods last week so I know they are being stocked there in addition to Kroger, Safeway, The Vitamin Shopped, CVS, and Meijer. That is a lot of stores!


Despite these delicious bars, I decided that it was time to try my hand at making my own granola bars. YES! Ryan had been asking me for some and then I had a friend ask me if I had a recipe.Well, that convinced me to create one PRONTO.


Even though I had a list of ingredients from various granola bars I had had in the past, I wanted to make my unique or at least healthy with fun ingredients. Where I saw that I could agave nectar, I decided to use brown rice syrup. I had read that when use in baking that it would harden when cooled. This was ideal for me since I had only a little over a 1/2 cup of it left. Yikes! I thought I had more but I thought it would work.

What were the next ingredients going to be? How about something creamy and something fruity? The dried cherries have been on sale lately so I knew I had plenty of that on hand. I keep my raw nuts in the freezer so they won’t go stale. I found raw pumpkin seeds and sunflower seeds and then also decided to add hemp seeds to the mixture. How about some Trader Joe’s peanut butter with flaxseeds?

How about some oats? Rolled oats joined puffed brown rice and puffed millet for a crunch and for the mixture to come together. It started looking really good!

I then combined the wet ingredients and mixed the dry ingredients with the wet. I made to mix together until everything seemed evenly distributed. I then patted the mixture on a baking sheet lined with parchment.

I baked it for 15 minutes and then let it cool for10 minutes before cutting. They came out really well!


In a large bowl, mix dry ingredients like the oats, millet, brown rice, nuts and seeds, and cherries.


In a small bowl add the peanut butter and the brown rice syrup. Place in microwave for 30 seconds.


Add wet ingredients to dry ingredients and mix well until evenly distributed. Reserve 1 1/2 cups on the side.


Use the rest of the mixed ingredients and place on baking sheet. Pat until evenly distributed.


Bake for 15 minutes or until lightly browned. Remove from oven and cool for 5-10 minutes. Using a knife, cut into 4×2 inche bars.


Cool completely and then wrap individually in seran wrap or store in a plastic container.


Spread the rest of the mixture and loosely spread on baking sheet. Bake for 12-15 minutes and remove from oven and cool.