Ever since I posted that I made this I have had some ask for the recipe and here it is. It would mean alot to me if y’all had a second to take the poll on the right side of the website letting me know what type of recipes you would like to see. Since I have ONE person take the poll indicating raw desserts, I decided to create a new recipe.


This tart recipe made enough for 2 people but of course can be doubled to make four 4 individual tarts.This semi-raw dessert was ready within an hour and was ready for the Ryan approval. Well, not approval but taste testing. He ate it within 10 minutes and gave me the 2 thumbs up! I am glad to know that Ryan is enjoying semi-raw to raw desserts because at the end, I want to use natural sugar in the form of fruits in my household when children come along.


Here is what I started off with: 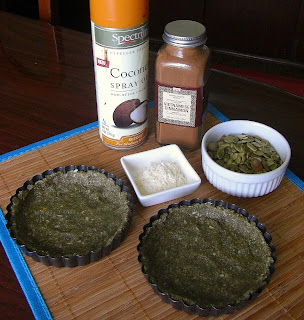 I decided to try a different nut than the normal almond or cashew base and went with pumpkin seeds otherwise known as pepitas. This was VERY simple to made and did not require soaking. It is SO much quicker so that you can focus on the filling. Can you see the color? Nice deep green with unsweetened shredded coconut, pepitas,cinnamon, and agave nectar. YUM!


Next came the filling which consisted of ripe peaches. Ryan had a plain peach for breakfast and exclaimed how delicious they were. Yay for peaches. I simmer 2 mashed peaches, coconut milk, cinnamon, unsweetened shredded coconut and added agar agar until it dissolved. I barely cooked it but allowed it to simmer on a low heat until the seaweed dissolved. I then divided the mixture between the tart dishes and refrigerated for an hour. So good. I hope you like it as much as we did.


Place ingredients in a food processor and blend until smooth. Divide seed mixture between tart plates. Place in freezer while making the peach filling.


In a small bowl, mash peaches and place in a small pot.


Remove from heat and divide mixture over chilled crusts. Place the finished product in the fridge and chill for an hour or until ready to eat.


Puch bottom of tart to reveal set crust and plate. Decorate with peach wedges and drizzle with agave. ENJOY!