It has been nice to have a weekend that is quiet and relaxing. We slept in for the first time this morning, which we hardly EVER do. I kind of regret it because I was in a groggy slow pace the rest of the day until Ryan and I played racquetball. I began by making a nice fresh fruit salad since I scored a bunch of berries and fruit on sale at the store the night before.


Golden raspberries, blackberries, strawberries, coconuts, peaches and some cantaloupe. I know! So much fruit, but I plan to freeze some for smoothies too! Ryan and I ate 2 bowls of fruit with some Ezekiel toast and Earth Balance and continued to enjoy our morning / early afternoon. 😉 You know what it was? It was the 1.5 hours of Zumba that allowed me to rest so long and nice. Here is a picture of the festivities last night: 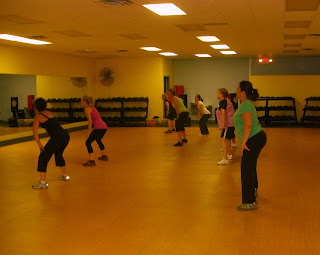 It was a nice group of women. I was able to meet 2 more instructors, but the 3 of them rotated and taught the class. I finally found out how old my instructor is. She actually had turned 59 last night! She is so energetic and loves to inspire through her music. I like instructors like that. I am excited I found this place, I just hope I am able to coerce more friends to come with me! 🙂


This past week we had a couple we had not seen in over 2 years.We found out that they were moving up for the summer for the summer graduate degree program that can be completed over 3 years. It wasnice to visit with friends from Texas because it reminded me of Southern hospitality. Not only that but it is always nice to be with friendly faces too!


While I made a non-vegan meal for our friends, I made a raw and vegan dessert that would be light and perfect for the hot weather. We had an hour break where we gave them a tour of on the town and then came back for coffee and dessert. DO you know that the men devoured the dessert in 5 minutes? Well more like 7 minutes but it was super quick! I was happy they liked it.


I had read about the recipe on a blog that lead me to the original recipe on Kristen’s Raw website. I read the entire recipe and decided I had to make it. It was very easy to make, but a little labor intensive since you need a food processor AND a blender. NO worries, though! It was totally worth it. I plan on making it again varying the fruits. I hope you do too!

You choose your berries and you divide then, blending 2/3 of the berries in the blender with the other ingredients.

Mix well, and you have the berry portion of your cobbler.

You then continue on to the crumble, which is a mixture of walnuts, coconut, raisins, orange zest, cinnamon, and figs. So delicious! I hope you give this SUPER healthy dessert a try!


Preparing the crumble
Place the nuts, coconut, orange zest, cinnamon, and salt in a food processor, fitted with the S-blade, and process until coarsely ground. Add the raisins and figs, and process until the mixture resembles coarse crumbs and holds together when gently pressed between two fingers. Set aside.


Preparing the filling
Take about 15-16 ounces (approximately two-thirds) of the berries, chop them and set aside in a large bowl. Then, place the rest of the berries along with the POM juice, dates, and agave in a blender and process until smooth. Pour into the bowl with the chopped berries and stir.


The Assembly
Pour half of the crumble in the bottom of the glass. Spread the berry filling on top. Alternate several times, ending with fruit. Eat as is! So yum!