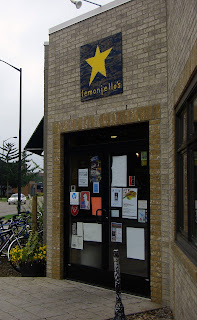 I finally get to talk about one of my favorite coffee shops in Western Michigan! Lemonjello’s is located in the heart of downtown Holland, Michigan and is right across from Hope College. Even though I do not live in Holland, this isa place I find myself all the time. It is the perfect environment for friends and family to meet over coffee and yummy eats. 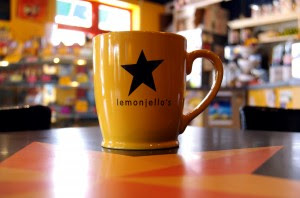 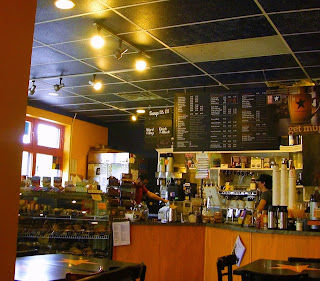 Lemonjello’s serves fair traded coffee and espresso drinks and has a variety of baked goods that include bagels, scones, muffins, granola bars, cookies, and specialty baked goods as well. Another fun thing about this place is that it offers vegan options. There is hummus with veggies and pita wedges and 2 different selections of soup daily, which include a vegan chili and broccoli cheddar or tomato basil soup.

Another unique activity that happens at Lemonjello’s is that it features local and regional music from area artists. There are nights where there is OPEN MIC night and back to back evenings with concerts. Even though the cafe is small, the owner has developed an area that can be converted in a smaller stage area with lights and all. VERY resourceful.


Even though there are several coffee shops and cafes in the area, I believe this is one of the most popular places. WIFI is free. The coffee is delicious. There are great eats and there is great music playing all day.


I had a chance to interview the owner, Matthew Scott, who ended up telling me a little about himself and how Lemonjello’s came to be part of Holland’s community.


Are you originally from Michigan? If not, how long have you been in MI?
I am from Michigan originally. Born in Grand Rapids — moved around a lot– landed in Holland around 2 yrs old– tried to leave several times but then got the opportunity to do Lemonjello’s.


How long have you been a vegan? Have you found it difficult to lead a vegan lifestyle?
11 years. But really the past 5-6 years I’ve been what I call a 95% Vegan. Because I have a lot of food allergies and intolerances, I sometimes have to choose to eat something that has a small amount of an animal derivative (like casein or choosing something with a little egg instead of something with gluten) instead of something that will more negatively affect me. It’s difficult in that respect. My body can’t process yeast or dairy, I choose not to eat meat, and I have been on a low gluten diet the past few years. I’m trying to learn how to balance all of that to stay healthy. I’m learning how to do more and more to eat vegan, gluten-free, & yeast free, but it takes a lot of time to prepare food and I work a lot. For that past couple of years I’ve been trying to perfect a vegan and gluten free muffin for my store– one that is as moist and muffin-like as a normal muffin. About a month ago, I felt like it was finally where I wanted it and we started serving them at the store. (the gluten-free vegan BlackBarely muffin– Blackberries but not really anything else normal in it, so my baker came up with BlackBarely as a name).
So there are ways to avoid everything I try to avoid in food, but it sometimes takes a while for me to learn to do it and have it taste how I want.


Why have you chosen a vegan lifestyle?
Through my adolescent years, I was always sick. I started testing food because a friend suggested it. I felt so much better that I started eating at her house. Her family was vegetarian & she was a vegan. I learned a lot about foods I had no prior experience with and learned how to prepare them. I adopted that lifestyle because I felt a ton better. I learned a few years ago that I was born without a gallbladder and that probably causes my body to process some things less efficiently (dairy, meat, fats, grains, yeast). It’s nice to finally have a real reason for my diet, but I wouldn’t go back even if I could eat anything again. In the process of getting to where I am now, I have fallen for this lifestyle. I agree with animal rights issues and farming & sustainability issues. I think that it forces me to be healthier and eat more variety and more in season foods and more local foods. I think I am eating more in line with what was intended for our bodies. It just makes sense to me.


I know that you have a BUSY music schedule at the cafe, but something I wanted to know is whether you are musically inclined?
Yes. I have been playing and performing since I was 7 or 8 years old. In high school I toured with 2 different choirs as a vocalist and as a drummer. I was also in an alternative rock band that did quite well during my high school & college years. After college, I spent 2 years touring on weekends as guitarist/vocalist for an indie band called Annie’s Apology. We released 2 eps and a full length record and did pretty well for ourselves for that time in the music world. We played a lot of coffeehouse venues. I realized through a few good and a lot of bad experiences that most places either served a good product and sucked at booking/promoting their concerts or did the music side well but didn’t serve a good beverage. Usually these places wouldn’t last long because they didn’t have the one to sustain the other. I wrote the business plan for Lemonjello’s Coffee with my drummer because we thought there had to be a way to serve a great product and run a sustainable business that could financially support a venue and that would ultimately produce a place and an atmosphere that would be something for everyone. I never thought I’d actually do it and I never thought it would go this well, but we are one of the longest running all ages venues in Michigan…


You mention supporting the local farmers by being a part of Equal Exchange, but why is it you do not mention that you also sell vegan food and baked goods?
It’s something in process. I need to update that. I took out some stuff when we redid our website last year. We were unable to get our vegan chocolate sauce for about 2 years, so we were having difficulty serving a vegan mocha (something we’ve been known for since we first opened) that tasted good. About 3 weeks ago, I got my first batch back in. It’s not the same exact product we used to use, but it was created in the same chocolate lab using a similar recipe. I think it’s better. It’s vegan, organic, gluten-free, & fairly traded (both the sugar and the chocolate. And it doesn’t use high fructose corn syrup like most other vegan options on the market! I have to import it from a company in Canada called CE Organics, but it’s worth it.
So when we couldn’t get the chocolate I wanted and we didn’t have a vegan muffin (still. I just couldn’t get it right), I backed off any direct statements. Then I found out the Morningstar meatless crumbles we were using in our Vegan Chili were no longer vegan. I did some research and found out that they never released that they were changing their recipe to one that included egg and casein. There were a lot of protests online. The only response from the company I ever saw said (basically) “Sorry. Deal with it.” We changed our classic Vegan Chili recipe as a result and the new recipe is also gluten-free, so that ended up fine. But I was horrified that for possibly a few days or even a couple of weeks, I was serving a non-Vegan chili. There’s no way to know. I check packages regularly, but not every day. But this instance has made me check things more regularly. A similar thing happened a copule of years ago when our top selling soup came in and the box had a new ingredients list with “chicken stock” typed in larger letters at the beginning of the list. I sent it back, but that could have been missed if I wasn’t putting that order away.
There are enough unannounced changes in the food industry like this that it’s made me wary. There are also tighter rules on allergen handling now. I’ve tried to work on Lemonjello’s the past year or so in this regard– tightening what we do and how we handle things and how we package things and I think we now deal with allergen issues; vegan items in a better way that is above the par of most places around.
All that to say that am feeling re-confident now about our products and the vegan things we offer. This summer has given me time to get back to where I wanted to be– vegan chocolate for mochas, a vegan muffin, a second vegan cookie option (and maybe a third soon), and more staff awareness on food handling and packaging so there’s not cross-contamination.


Is Lemonjello’s everything you envisioned it to be?
Yes and No. I never thought it would last this long. I’ve never done anything this long. So it’s exceeded my vision. But it has become the place I envisioned because lots of folks have come in and made it the place they wanted and needed– that was always my ultimate goal.


Where do you see yourself or your business in 5 years?
My landlord asked me that last week. It’s now been 5 years since we added on and doubled the size of the space, so we’ve been talking about how much it’s grown since then.
I honestly don’t know. I think I will be doing Lemonjello’s for at least another 5 years, but we’ve more than doubled in business in the past 5 years and I don’t think we can do that in this space again. But I’m wary of another location because I tried opening a second shop (a sandwich shop called Pocket Sandwich Company down the road) and I couldn’t manage both of them and eventually had to choose one.
I think that there will be a lot of me tightening what we do and how we do it. We’re trying to keep up with the changes going on in the coffee industry right now and have some (I think) exciting new things to offer in the next year. And the education requirements for my staff have been going up, which I think will set us apart from the average coffee shop more and more in the coming years. I’m excited to engage more with the constantly growing community of folks here and the communities we’re sourcing our beans from and trying to bring those 2 things closer together.


Matthew allowed me to share one of my favorite vegan cookies from the coffee shop that I enjoy. I was so glad to be able to have an inside scoop on the inner workings of a local business. It teaches me how to be more appreciatice and supportive of more local businesses because they all have visions and we as a community help them come into fruition. Thanks Matthew for a great interview!


When the batter is mixed well, slowly beat these in one at a time:
2 1/2 cups rolled oats
3/4 cups chopped walnuts
3/4 cups raisins (or dried cranberries)


Shape into 1 ½ inch balls. 6-8 per tray. Flatten somewhat.
Bake at 300 degrees for 20 minutes or until edges are golden (in a convection oven, so that would change for a home oven… probably more like 10-12 minutes at 375 degrees. Experiment. That’s part of the fun!)