Today proved to be a beautiful day in the neighborhood until 1pm and then the heat came back to Michigan and the fans were turned on. It was gorgeous and cool when I woke up 8am this morning to get ready for a 2 hour Zumba class. Can you believe that this was a 2 hour class? Actually some instructors came from Grand Rapids to teach us technical steps for each latin dance, like merengue, cha cha, salsa, belly dancing, and more. Then we dance to the music with all the steps. It felt like were in a club in broad daylight and it was even more intense than a regular Zumba class. I hope the gym repeats this Saturday class again! I think I might have burned 1,000 calories in 2 hours just moving my hips, legs, and whole body. There really is nothing like moving to good music.


Since I been working out almost twice a day almost every week (becasue I want to), I have not been feeling terribly hungry and for that matter I have not been craving bad foods, like white bread, pastas, or even sugar. I have been forcing myself to take my protein shakes so I can have my energy and supplements at the same time. One thing though that I have been doing is listening to what my body wants.


My naturopath told me that when my body craves a certain thing it is because I am missing a certain mineral or vitamin. I have read other articles stating that this is a myth, but who is to say it is NOT correct. Have you ever had a charlie horse? One of those horrific spasms that hits your leg where you feel immobilized? I have heard and read it is because the body lacks potassium. What has potassium? Bananas. I crave bananas once in a while and I cannot help but think that craving something natural does NOT indicate what the body needs. I think God designed our bodies to have a natural balance and intake of foods that God has created for us to ingest. So if the body tells me to eat an orange, will I ignore this and say, “No, you have to much acidity and I cannot have you!” well….this might mbe far fetched but here is a website that supports my statement. Food Cravings article.


What do you think?


I listened to my body yesterday and made a raw dessert with limes. I was craving limes and decided to obey it. I recently received several products from Coconut Secret called Raw Coconut Nectar and Raw Coconut Crystals. 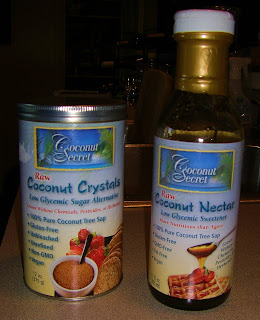 These 2 products are made from the sap of coconut tree blossoms. They are raw, gluten-free, vegan and contain 17 Amino acids, vitamins, and minerals. It is a low glycemic liquid sweetener and even MORE nutritious than agave nectar.

Did you know that even some agave nectar contains High Fructose Corn Syrup??? Yikes, I know! I took advantage of using these products in a raw dessert that I was craving. How could I have craved something I have never have? Here is the recipe for a quick raw dessert that even Ryan loved and said he enjoyed. The only let down is the color. Who can help the color of the lime cream? Ryan thought it looked like pea soup which I told him that it seemed silly. It had fruit, lime cream and a delicious crumbles. See for yourself!


Place all ingredients in a food processor and process until it resembles wet sand. Set aside.


Place all ingredients in the food processor and whip until really blended and creamy. Adjust sweetness according to preference but I liked the cream tangy with a little sweetness.