Today I gave my body a rest after working out twice every day this week, which is 8 times! I felt it today and decided to listen to my body and pick up tomorrow with a game of racquetball. Did I share with you what has happened this week with our racquetball games? On Wednesday we played a mean game where I ended up splitting the racquetball. Here is what it looks like: 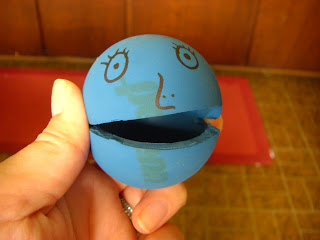 I took a poll on Facebook asking what I should name the ball. I think I decided to go with S.P. Lit.  ROFL. Cute right? Well, this week has also been one for minor injuries. Have you had a week when you feel like you are getting hurt in so many different ways? I stubbed my little toe on a cinder block and it HURT like crazy. I shed some tears. It made my foot hurt for 2 days, but I also continued exercising too. Ryan. accidently hit me in the face with the rball yesterday and THAT hurt too! I got a phone call right after that so I was able to cool off but Ryan asked me what would make me feel better and I told him that watching (500) Days of Summer with me would be great! It takes a lot for him to watch chick flicks. ha ha.


Anyway, I recovered and went on with my dinner plans despite a conversation about having pizza instead. Since I had been planning on this new recipe I said that we could have pizza on the weekend. That was settled. This next dish came from Amber from Almost Vegan. I had  mentioned that I had not been good about making dishes using tempeh, despite my drastic attempts to add more protein to my daily calorie intake. Amber came to the rescue and suggested I try a recipe she made a while back that she found on Vegetarian Times. I decided to try her slight adaptation that added carrots.


Spaghetti Bolognese traditionally does not take a lot of tomato sauce but is a meat-based sauce that originated in Bologna, Italy. The actual traditional recipe contains pancetta, milk, onions, carrots, celery, wine and beef, but outside of Italy it is mainly known as a meat-based sauce served over noodles. Of course none of this is vegan, so I definitely liked the tempeh as a substitution for the meat crumbles.


Instead of using regular spaghetti I purchased some gluten-free spaghetti that I had heard many describe as being a great substitute.

It promised not to get mushy after cooking so I was excited. I remember trying a quinoa-based noodle and it was awful, but that was many moons ago and I am ready to try new things gluten-free.


I had a package of tempeh that had been staring at me from my refrigerator. It was a 3 grain tempeh which had barley, millet, and soybean. Well, I was sickened because barley is not gluten-free, but guys, it was in my fridge, so I gave myself grace since this was purchased over a month ago. (tempeh lasts for a long time)

The end result was VERY delicious. The tempeh is crumbled in a tomato sauce with fresh basil and parsley and simmered to bring flavors together. The pasta was GREAT and the added homemade vegan parmesan was the BEST.


My non-vegan hubby ate the dish in a flash but I later found out that tempeh is NOT his favorite so he would not like me to make this for him again. He has specific dislikes that are funny to me. He does not like carrots in his spaghetti sauce and he was not won over the tempeh. I was not crushed, just happy he ate it and did not make a big deal about it. At least I have leftovers for myself!  Enjoy this as much as I did!


Using your hands, crumble tempeh into fine pieces. Set aside.