I hope everyone had a great weekend. I started my morning with a great kickboxing session and then followed it up with a great new post-workout slushie.


Somehow this helped me relax and remember that I did have a weekend. I do not personally remember it since it was very busy with cooking on Saturday and then hosting a dinner party for 8. This was the first time I was traveling with food from one location to another, and not a particularly close location either.


Ryan and I hosted a thank-you dinner to several folks who made us feel welcome since arriving to Michigan, whether it was giving us mutiple nights of rest in their home or for extreme generosity. When Ryan and I discussed what kind of menu for me to prepare, we settled on Italian. Noone can really go wrong with Italian, IF one is careful!


The whole meal was vegan except for the main entree. I am working on making a complete vegan meal for non-vegan folks in the future, but this time, little time was on my hands for planning well. I made Emeril Lagasse’s Chicken Parmesan with Smoked Mozzarella served with Oven-Roasted Tomato Sauce and Linguine.


For starters, the guests enjoyed a tray of fresh veggies and sesame crackers to dip in the Wild Mushroom Pate’ which I tweaked from the previous blog post. EVERYBODY raved and I had several ask for the recipe.


After the appetizer, I served a green romaine salad with carrot shavings and radishes mixed with an Italian Balsamic Vinagrette.


The main meal came along, plated with the chicken parmesan and the linguine mixed with the oven-roasted tomato sauce. If it is one thing you try from this recipe, it is the tomato sauce. It is VEGAN and it is OUT OF THIS WORLD! People were moaning left and right because the flavors were fantastic. Now, how did I know how this would taste? Ryan prepared this meal for me during our 1st year of marriage and of course when I was NOT a vegan. When I plated my dish, I cut up some Field Roast sausage, which is of course vegan, and added it to the linguine and the sauce. I was JUST a happy camper as everyone else there.


After some nice conversation, I brewed up some Fair Trade coffee and plated the vegan tiramisu. I am SO glad I decided to make a vegan dessert. There is nothing like making a non-vegan dessert and NOT getting to taste it. It is crummy actually. Veganizing the tiramisu was Ryan’s idea. I love that he thinks about me and gives me the challenge, except I did not quite take the challenge.


I searched for vegan tiramisu recipes that had already been created around the web, including Whole Foods recipe and finally decided to try Veggywood‘s Tiramisu recipe. Even though her recipe was inspired by other recipes she gave her own touch. Since traditional ladyfingers also contain eggs, I also made homemade ladyfingers, which is also included in this recipe. 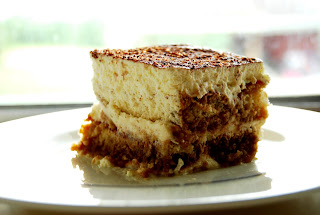 The key flavors are espresso, chocolate and creamy and fluffy goodness. I started by brewing 2 cups of my own espresso using my favorite company: 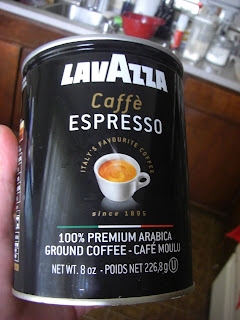 After it brewed and cooled, I added some Marsala wine to bring out a little more bitterness with a hint of sweetness.


Next I tackled the ladyfingers. Easy recipe and easy to handle. I placed the dough on a cookie sheet and baked. I then let it cool slightly and but the cake into fingers so that I could then place in the oven to bake for another 15 minutes. 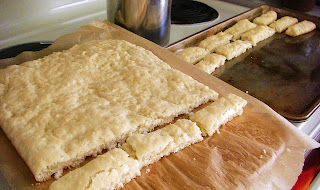 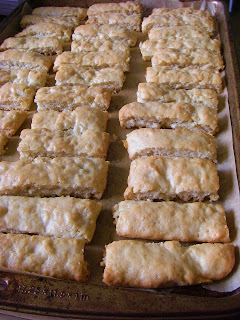 
This dessert tastes great the day after because it allows the flavors to combine and the ladyfingers and cream to become in the dessert. This recipe made enough for one 9×9 square pan and 2 parfait glasses for the taste testers here! I would definitely want to tweak the marscapone subsitution but it was a nice dessert and perfect for a dinner party.


Preheat the oven to 350 degrees. Sift together the dry ingredients, and stir just to combine.


Add the oil, vanilla, and water. Stir until most of the lumps are gone.


Add mixture to the cookie sheet and spread evenly over the pan. Bake for 25 minutes and remove from oven. Cool for 5 minutes and transfer parchment paper with the baked cake to a cutting board. Cut the rectangular cake lengthwise in three and then cut widthwise into finger size cookies, as shown above.


Place on cookie sheet and bake for another 15 minutes until slightly golden. Remove from oven and cool completely.


Make the cream first and stick it in the fridge to set while you’re making the cookies.


Add in the flour, arrowroot powder, and extracts. Beat to combine.


Sift the powdered sugar into the mixture. Beat until thickened for about a minute. It’s going to come out like a heavy cream, but not as thick as whipped cream. If it looks too thin, don’t worry because an hour or so in the fridge will thicken it up, as will leaving the whole dessert in the fridge overnight.


Pour the cooled espresso into a shallow bowl or pan, and stir in the marsala wine if you are using it.


Line up the cookies, espresso, cream and glass tumblers and 9×9 glass pan.


Dip each lady finger into the espresso mix for a few seconds on both sides until saturated.


Line the cookies along the bottom of a glass dish, pressed together. 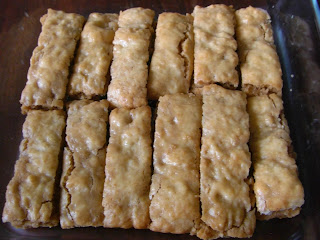 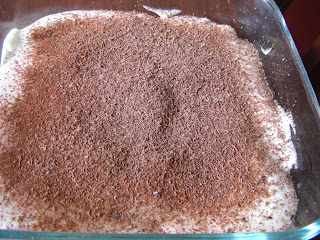 Repeat the same process for the parfait glasses but making several layers between the glasses. If you make this in the morning, it can be refrigerated and consumed in the evening, otherwise, refrigerate overnight and consume the next day!

It is MANDATORY to have a cup of coffee with this dessert for a full experience! ENJOY!