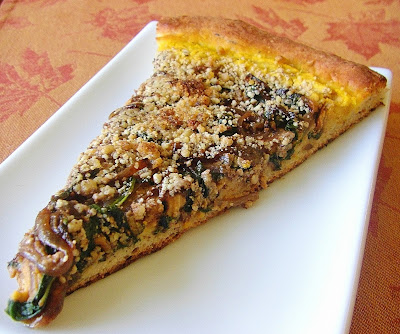 Yesterday was a whirlwind on events! Well, I am talking about the weather that we had and that stretched from Michigan down to Texas. What a crazy system! Holland’s schools closed and tornado warnings rang clearly. You know what I saw? I saw lots of wind and some rain but nothing bad like I heard from other places. The sun finally came out in the afternoon which made me smile because the weather is almost reminding me of Houston’s volatile weather. 🙂


Yesterday I had 2 green monster smoothies since it was a 2-workout day! I try to fit those in if I can. I have energy through-out the day.


My first smoothie was a mango smoothie with spinach, flaxseed oil, protein powder and a banana. Later in the day I received one of my favorite magazines in the mail and felt inspired to make this: 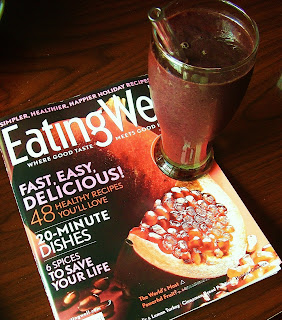 After a full work day I decided to plan dinner and then leave it sitting while I ran to my zumba class. Can I tell you again how much I ENJOY zumba???? I cannot get enough! I even am planning on getting certified because I want other people to share in this fun fitness that works the whole body. I have people that do not go because they think they will not get the workout they need but that is a bunch of silly talk. Look at how I ended up after my workout yesterday! 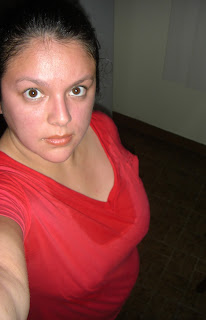 It was SOOO hot in the studio so on top of a great workout I also got a little dizzy from the lack of circulating air. I have been harboring a small migraine because of the intense workout but it was SO worth it people! Try it at your local gym if you have not. I love music and this is a great way to enjoy popular music.


When I got home, I had this waiting for me: 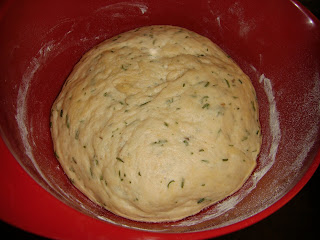 A Rosemary pizza crust fully risen and ready to punch! 🙂 I have been wanting pizza for a while, actually since reading everyone’s pizza posts for Foodbuzz’s  Project Food Blog. I finally had a night to myself to focus on a recipe that had been brewing in the deep recesses of my brain. 🙂 I had been imagining a pumpkin hummus for a long time and decided to make a gourmet vegan pizza of my own. Boy was I a happy vegan!


Even though I am a traditional marinara user for pizzas I decided this would be a whole new take. The flavors melded perfectly together and I was on cloud 9 because I realized I really did not need Daiya cheese to make a typical pizza. There are so many options and I am going to make sure I try them. Enjoy this with a HUGE green salad! 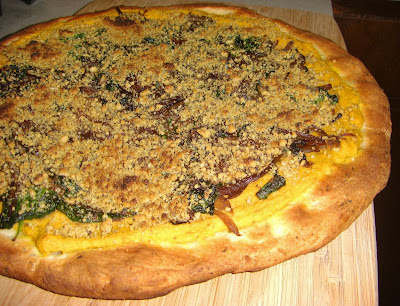 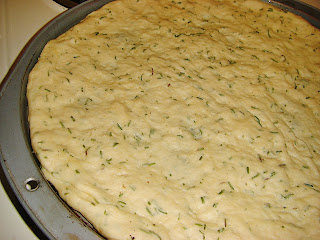 
In a large mixing bowl, mix together 1 cup of flour, salt, sugar, rosemary, yeast. Stir well. Now quickly add in 2/3 cup of very warm water along with your 3 tbsp of oil. Stir well.


It will be very wet and sticky at this point. Now add in ¾-1 cup more of flour, gradually, as you stir. Once all the flour is in, grab the dough and place on floured surface. Knead the dough for 5 minutes, adding flour if it gets tacky. After 5 minutes the dough should be smooth and not sticky. Form into a ball and place in a large, oiled bowl.


Cover the ball with a bit of oil so it doesn’t dry out. Now cover the bowl and let it rise for 1.5 hours. You can punch out the air once half way through. Cooking time will vary but my pizza took 14-15 mins at 500F. 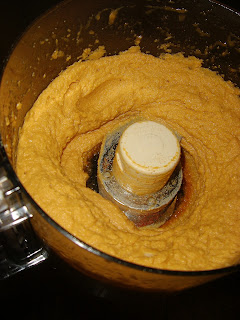 
In a food processor, add all the ingredients and blend until smooth. The hummus should not be to salty since the parmesan cheeze will add some salt to the whole pizza.


In a medium skillet, add 1 1/2 Tablespoons oil on medium heat and add red onion and cook until the onion is transparent and caramelized, 10 minutes. Add the spinach, the rest of the oil, and the spices. 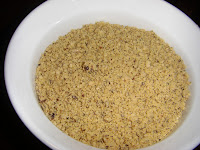 
In a food processor, add all the ingredients and pulse until the mixture resembles wet sand. Makes 1 cup.


Assembly
Remove pizza dough from bowl and flatten dough with fingers as you hold it. Place it on a greased 14-inch pizza pan. Spread the dough evenly. 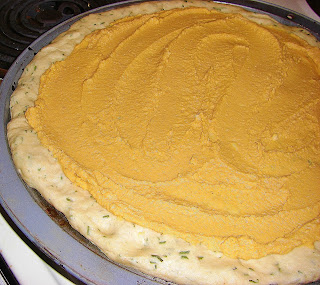 Spread the hummus evenly on top of the pizza. 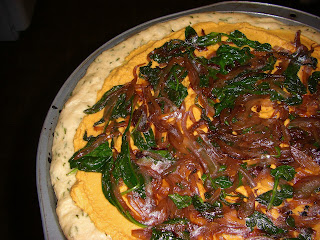 Add the caramelized red onions and spinach. Sprinkle with 1/2 cup with parmesan cheeze.


Bake for 12-14 minutes until crust slightly browned. Cool for a bit and slice.