We had an abnormal warm but beautiful weekend. How about that for fall? A high of 85 yesterday but I still embraced it.


So just to let you know, I am still here and very much pregnant still. 12 more days folks unless God decides to bring our little joy before. Did I mention that my husband would rather she be late by 2 days? Our 1st concert of the season with the Holland Chorale is on the due date so he would VERY much like for me to still sing in his concert. Well, in addition to that, if I give birth on the due date he has a substitute conductor to keep the show going but since he has been working hard on this programming I know that all things will work the way God wants them.


I know it has been a while since I have updated you on my singing but it HAS been on the back burner due to this pregnancy. I had one voice lesson and have another planned for the day before my due date. Why not keep life going right? I will be working on a duet from the opera Lakmé and I also will be learning the aria from Madama Butterfly called ‘Un bel di.” I am really excited! Singing hymns at church has sufficed for the meantime but I know I cannot get behind especially since I have the soprano part to learn for Mozart’s Requiem for the spring.


I DID forget however to share the recordings that I finally received from a recital I sang in May. I had mentioned I learned a folk song cycle by Canteloube called Chants D’Auvergne which are in a French dialect called Occitan. They were really fun to sing and I hope to perform them again in the future. Enjoy listening to them.


This morning I finally made something worth posting especially since I have been pinning multiple recipes in Pinterest focusing on pumpkin. Anyone else doing the same??


I have had my eye on pumpkin biscuits and I decided that this morning was the perfect morning for them. They are slightly sweet and delicious with something savory. It has the perfect amount of spices and they are probably the fluffiest biscuits I have ever made. I veganized the original recipe and used whole wheat white flour instead of all-purpose flour. I thought they were great as did Ryan. Preheat the oven to 450 degrees and line a baking sheet with parchment paper.

In a large bowl, whisk together the flour, baking powder, salt, brown sugar, and spices. Blend in the margarine using a pastry blender.
In a medium bowl, combine the pumpkin, coconut milk, and agave nectar.
Pour the wet ingredients into the dry ingredients and stir until the mixture holds together. Knead lightly on a floured surface and roll out to 1″ thickness. Using a 2″ biscuit butter, cut the dough into circles.
Re-roll the scraps and cut out biscuits until you have used all of the dough. Place on the prepared baking sheet.
Bake 12-14 minutes or until golden brown. Serve warm. 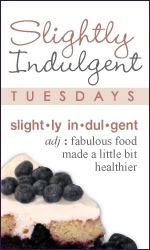