This is a compensated campaign in collaboration with Latina Bloggers Connect and The Allstate Foundation.

I personally like working for a cause other than my primary cause in life: to exhibit the love of Christ. I really enjoy spending time getting to know people even though my life continues to get busier and busier. I still crave a good talk with a friend or group of ladies.

In getting to know people you realize there is more to them than they share. Sometimes, they give you a peek into their private and personal lives, but sometimes the door remains closed and other times the dam breaks and someone opens up.

As many as you know, October is not only Breast Cancer Awareness month but it is also Domestic Violence Awareness month and as part of that, Purple Purse, The Allstate Foundation’s symbol for domestic violence, proudly represents a woman’s way to escape the cycle of abuse by gaining financial independence.  Now in its third year, The Allstate Foundation’s Purple Purse campaign has pledged to donate up to $350,000 to the YWCA for programs designed at assisting survivors of domestic violence and other women in need.

Sad to say I have known several people in my life that have gone through this and as someone who personally lived through it, here are a few facts you might not know: 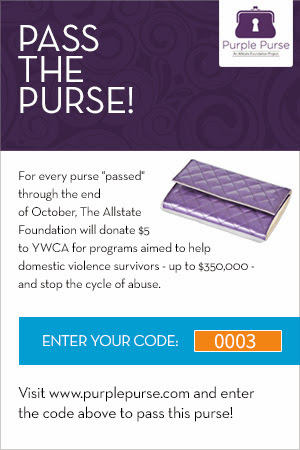