I hope everyone is surviving this heat and humidity. We have been keeping busy trying no to let the summer colds come out in full blast.


I had several comment a few days back letting me know that coconut water was the thing to drink to relieve migraines and to regain some electrolyte balance. My mother had also mentioned it to me so I remembered I had a coconut in my fridge and decided to open it and drink the water. Do you know that my Glass Dharma straw fit in the coconut hole I made? YES! The coconut water was cold and delicious and restored my energy because I needed it.


I went to a zumba class in the evening after going to a kickboxing class in the morning. I wanted to go to zumba since I had not been since returning to MI. I learned that the gym had hired a new instructor who supposedly teaches at another gym. Before the class started I also learned from the ladies that the instructor has a cult following. What type of class was this going to be? The zumba class was FANTASTIC!! It was an hour long RIGOUROUS workout with fun music and a fabulous instructor. There were even close to 25 women in the class, more than any of the classes I had attended. I just hope that the gym gets her signed up to teach more classes!


Either way, I figured that this type of class would induce a migraine, but it did not because I had my coconut water. Thanks everyone! 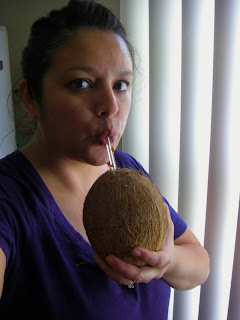 Since I have been working out alot, I have been craving protein. I am still enjoying my pre-workout smoothie but after I come back I am ready for breakfast. Yesterday I made a mini tofu scramble with soy chorizo and dinosaur kale and tomato slices. It was so delicious and filling. 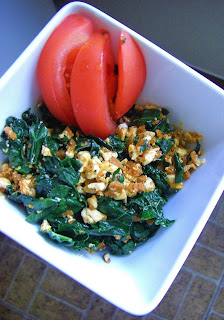 When it came to dinner this week, I decided to revisit a recipe I made before going vegan that I saw on Food Network, called Eggplant Timbale. Giada had prepared it and made it look so delicious, but it called for pork sausage and ground beef and tons of cheese. Yes, I admit I made it and it was good, but these are the sort of meals I was trying to stay away from since they did not seem healthy to me.


When making the vegan version, I decided to make it super simple and uncomplicated so that even though specific ingredients were removed from the original recipe, this would be a great vegan substitute for the original.

Heat your grill pan. Peel the eggplant and cut 1/2 inch slices lengthwise. Brush each side with olive oil and salt and pepper.
Grill until softened for about 3-5 minutes.


Boil pasta according to package directions. Once cooked, drain water and add pasta sauce to hot pasta along with cheese and sausage.

Layer the eggplant pieces within a 16 ounce corningware dish. The pieces can overlap.

Add the pasta inside the dish and seal the pasta with the eggplant.


Place a dish on the corningware and flip it around in order for the timbale to slip out. It should not break apart. Split between two people and enjoy with a green salad.

Go check out One Frugal Foodie for a great cookbook giveaway!