Last night a friend and I were able to venture out to Renos for a taste tripping event to experience the Miracle Berry I talked about 2 posts ago. We arrived 10 minutes after the event started and we noticed there were at least 10 people there already waiting to get their berry and items to try after consuming the berry.

I met Lisa Nowak who is a co-owner of the The World’s Best Fruit who explained how the berry works and where it came from and how it is just now coming to the US and being made known to the public. She found me through the Foodbuzz community and invited me out to the event and I invited a friend.

When we got there, we were given a ticket to receive one berry each, and a ticket to get our fruit plate and drinks.

The berry was frozen so we were supposed to let it thaw in our mouths and then swoosh it in our mouths. The peel of the fruit soon enough slipped off and I could taste the pulp. It tasted nice nothing particularly grand but we were told not to bite through the pit since it was nasty tasting.

We were given a wedge of fresh lemon, lime, and orange and 4 different sample drinks. These were grapefruit, lime, lemon based and SUPER sour and VERY gross. The third drink was Guiness. Once we had let the berry swoosh in our mouths for a minute, we waited for 2 minutes and then removed the pit from our mouths. We proceeded to taste each drink that had previously tasted SUPER SOUR.

The result? Every drink was SO much more enjoyable and made them palatable. It was very weird and strange to just think it was sour had just become sweet in our mouths. The Guiness tasted like a chocolate drink, smooth but not as bold and bitter, which I do not mind normally.

The fresh citrusy slices were VERY delicious! It was like consuming lemonade and limeade at an instant. I wanted to eat the rind as well but I exercised self-discipline! LOL! AFter we had done our taste testing, I continued to drink water which had a slight sweetness, but this expierence lasted an hour for ME. I also just allowed the pit to stay in my mouth for MY OWN experiment. It seemed to continue to work even past the hour.

Now what would the purpose be for this little fruit supplied in tablet form? I think it would be beneficial for diabetics or patients undergoing chemotherapy, but we I found out that it would be beneficial during the winter for fruits that JUST have happened to be cut green and are sour. I dislike addingtons of sugar to fruit that COULD have been consumed in its natural state. Have you not have a box of strawberries that were just tasteless? You could have this tablet and finish the pint off without having to thrown them out or add sugar! I think it is fantastic!

Trying to watch your sugar intake or dieting? This would allow you to eat otherwise healthy items with a sweeter taste with no added sugar. Yet again, they have something going here.

Our experience was great and even better, my photo was in the paper this morning on campus! LOL
http://www.statenews.com/index.php/article/2010/03/msu_club_hosts_flavortripping_party
Photo taken by Kat Petersen @The State News. 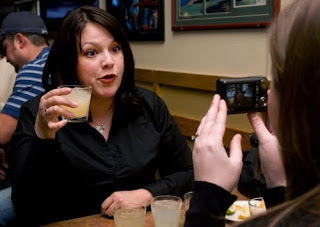