After an adventurous day at Irish Fest on Thursday, Friday proved to be filled lots of more events. We headed from Milwaukee to Chicago after a quick run to Starbucks. My brother-in-law’s girlfriend works for Starbucks so the whole family enjoyed delicious cold and hot coffee at a nice discount. 🙂 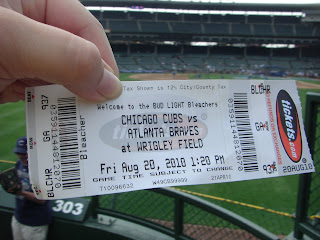 We arrived a few hours early in order to grab a good seat on the bleachers since it was all open seating. Last year we had great seats so we decided that those would be the perfect seats again. I found out that I could take my Nalgene water bottle so I could fill up at the water fountain so I packed that. (This was better than loading up on pop, you know!) I also packed up contraband. A nice Peanut Butter Larabar and… 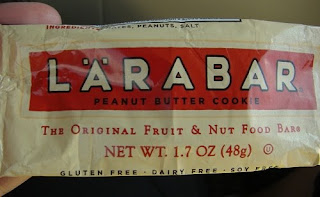 some roasted almonds with my protein powder in a reusable to-go container. It all fit in my small wallet so I was very happy. 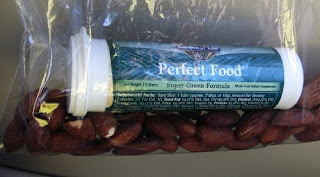 There we sat in the bleachers for over an hour watching the Braves and the Cubs warm up. 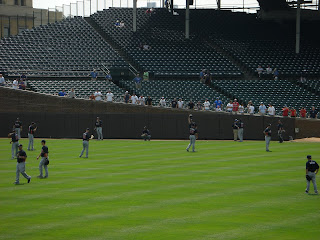 The non-ticket holders were standing outside the ball park fighting over stray balls. It was very comical indeed. 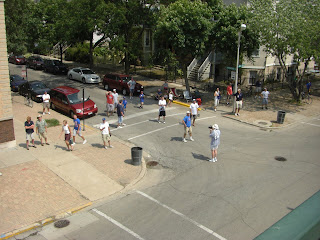 There were actually 5-7 baseballs that made it over so it was a fun playhouse for these grown men. The game was relatively low key until the 8 inning when it looked like it was possible that the Cubs were going to win the game. 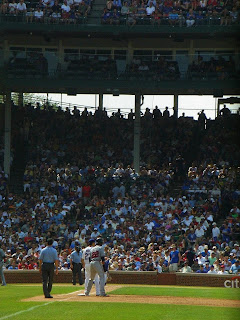 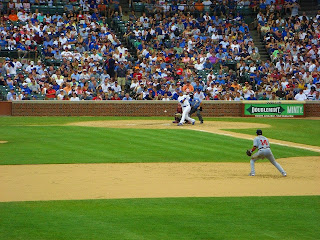 But alas, as I predicted, the Braves came through and scored 2 home runs on the Cubs. It was another depressing game for the fans. Even though I had to take breaks from the intense heat, I returned after the 7 inning when some thunder clouds covered the scorching sun. I was already tanned I have to say but my water kept me hydrated for sure! I DID enjoy a salted pretzel since that seemed to be the only concession food option I could choose. I know it was white flour but I enjoyed it with mustard and knew that it was not something I was doing for a LONG time.

Are you the type to sneak in your own food or do you load up on carbs??

After the game ended, we traveled an hour to get to our restaurant reservations near Rockford. I knew by then I would be famished and craving some greens and protein. I feel like I have been more patient with myself, choosing the right foods when nothing much was available. When I am the only vegan among 7 family members, my choices tend to be on the slim side. My mother-in-law was in charge of choosing the restaurant and she sent me the menu link and asked if the place had enough choices. I looked like I could deal with it and be creative. 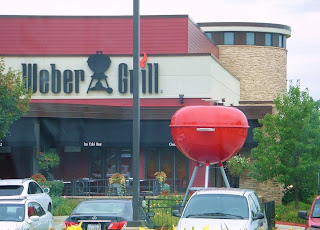 Weber Grill Restaurant is a steakhouse and grill with actual grilling stations as we entered the place. It was a very stylish place and smelled really nice. It was kind of strange enjoying that smell since I have not had meat in a while.

The place offered grilled vegetable skewers, steam spinach, steamed broccoli, grilled mushrooms and a veggie burger as vegan options. I tried to concoct a dish and asked the waiter if it would be an issue. I technically asked if I could have the veggie burger, bunless, with grilled mushrooms and onions (in oil) and a side of the grilled vegetables skewers. Since I had a pretzel and a roll at the game and at the restaurant I figured I did not need anymore carbs. 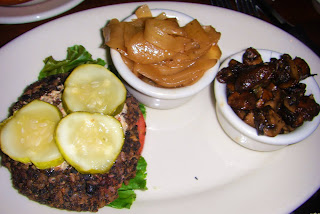 The waiter returned and said that my choice would be doable. Our evening was full of laughs and conversation until the eats came around. My veggie patty turned out to be a patty made from brown rice and black beans with some veggies, but it came on the pretzel bun. Well that was easily resolved. This patty was very crumbly and would not have made a good burger but it was great on its own. The mushrooms and onions were OUT of this world and the skewers were a mix of squash, pineapple, red onions, and mushrooms. The iced tea was fantastic made with tropical black leaves. All in all, I feasted well and enjoyed it. If you end up in the area, this is a can-do vegan place even if it means being limited.

No problems with the tummy!