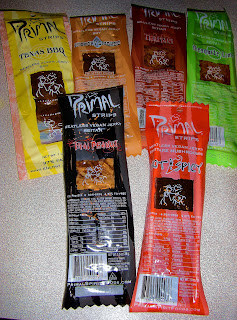 The lovely people at Primal were nice enough to send me a great sample to try. I had started seeing these at my local health store, but had not tried them yet. Even though I was not the type of girl to be into jerky, I thought these would be great to have on a road trip or when I was busy between rehearsals or even away from home.


Thanks Primal! These came in super handy and were very delicious! A girl has got to have her protein and I got it through this delicious product. They supply the jerky in 3 forms:

Does this sound appealing? At first it might not, but to me it was intriguing. Since being a vegan, I had yet to try seitan in different recipes so I did not really know what the falvor was going to be like. I am going to go right out and say it. I REALLY LIKED the Seitan Mesquite Lime Jerky.


This jerky came in so handy during one of my rehearsals because I had not had time to pack up a lunch so I took some leftover salad and this jerky and boy, did I enjoy it! It is a little messy, but it was not that tough to eat like normal non-vegan jerky. I even cut it in several pieces and added it to my salad. YUM!


What about the Teriyaki flavor and the Thai Peanut flavor? They were equally as delicious!! I am very much looking forward buying more of this product and taking it on trips or long rehearsals in the future.

OK so how about the Soy and Mushroom Based Jerky? They were a bit tougher and not my favorite. The soy based jerky comes in BBQ flavor and Hickory Smoked flavor, but I really could not get into them.


The flavor was not my favorite but that was my opinion. I hear that other people enjoy it. Maybe because I really really was just wanting more of the seitan based jerky. I am biased already!


The Mushroom-based jerky also proved to be a little too tough for my liking but if you are a true jerky lover, this might just be your kind of thing.


Now if you want to try the soy-based and mushroom-based jerky I have 6 of them to give away.


Please leave me a comment letting me know which is your favorite emergency snack and I will randomly pic a winner to receive:

Here is your chance to try this great product and to give your OWN opinion. Winner to be announced on Monday, May 17th, on my anniversary.